The Groac’h are not nymphs.  They symbolically represent the fact that at one time children often drowned in ponds and rivers and people invented malevolent entities that inhabited ponds and more commonly rivers in order to add a mythic element to the tragedy.

They were a useful invention, as a child could be symbolically told the dangers of water when they couldn’t swim, by making the creatures so frightening, no child would ever want to go near a river bank or pond.

They were indeed described as “an exceptional threat to human life and especially to children”.   They are also said to “ place eye-catching trinkets on the riverbanks in order to lure children closer to the edge”.   In other words the sparkly water can attract children too close to the waters edge.  Furthermore, “in order to further assist and conceal her heinous activities, she would make good use of the thick blanket of algae and pond-weeds that tend to gather on still or slow running water”.  So water weed can look solid but if you step on it you fall in the water and die.

“As they wandered within her reach, she would then grasp their ankles and drag them under the surface of the water”

The drowning of small children left to wander by themselves seems to have been such a frequent occurrence that some of these invented entities were given names. The River Skerne, a tributary of the Tees in Darlington, harboured a Groac’h by the name of Nanny Powler.

There were invented personas for numerous stagnant ponds as well as the different rivers running through the English counties of Cumbria, Yorkshire, Lancashire, Cheshire and Shropshire. 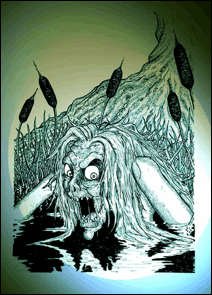