Maze’s are intended to be a symbolic representation of your life’s plan – the road to your Destiny – see also Maze.  Whenever we draw up a project plan for someone it looks like a very complex series of paths with possible branches dependent on what happens at each stage.

But, we can look at this alternatively as a mass of cord all wound round in a series of complex interlacing paths.  Follow all the paths – the cords - and you may come across real problems  - very tight knots!

Hence the expression – a knotty problem.

A Gordian knot is thus like a maze, but one which is excruciatingly difficult to navigate and solve.  It is a challenge on life’s journey that requires a lot of wisdom to solve.

The term ‘Gordian Knot’ comes from a legend of Phrygian Gordium associated with Alexander the Great. It is a metaphor for an almost intractable problem which can only be solved by  "thinking outside the box". ("cutting the Gordian knot"):

"Turn him to any cause of policy,
The Gordian Knot of it he will unloose,
Familiar as his garter" (Shakespeare, Henry V, Act 1 Scene 1. 45–47) 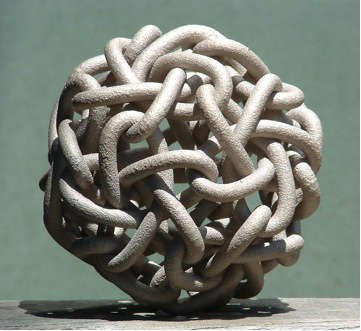