An apparently rather brutal form of vermin control [to anyone who farms, a fox is vermin], fox hunting actually employs a vast amount of symbolism. 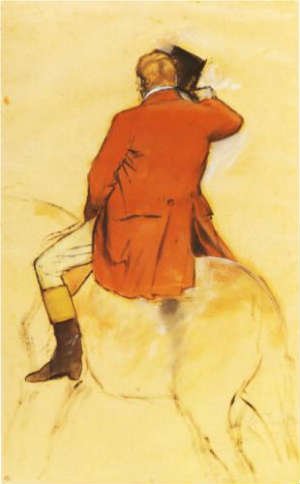 "Rider in a Red Coat" by Degas.

Given that it is easier to poison a fox or lay traps for it, than ride after it and catch it with dogs, it should be apparent that this is in large part a symbolic act and not a practical one.  Given that most hunts do not catch the fox either, practically it is not very effective.

Thus we have first and foremost the horse combined with the idea of a steeple-chase.  Thus symbolically the person is riding over the spiritual landscape and is accompanied by a dog.

And which little creature symbolically represented the old shamanic religions?  The fox.

Thus fox hunting is symbolically the rooting out of old shamanic beliefs by the new moral based societies.  Fox hunting was often a sport enjoyed by Freemasons for example, because of this link [and Churchgoers].

When a fox is caught and killed by the dogs, it is traditional to smear any new member of the riders with the blood of the fox - an apparently barbaric custom and one designed to annoy anyone who has to dryclean their jackets afterwards.  But the blood was intended to be symbolic blood.  One of the ways in which Spirit input is symbolically represented is blood.

Before this symbolic act, a rider has to wear a Black coat, signifying lack of spiritual awareness - in some senses 'in the dark' but also taking on the symbolism of Black.   After the symbolic killing of the fox, and the smearing of blood they are allowed to wear a red coat.  They have been 'bloodied'.

It was also traditional for the members of the hunt to have a small glass of wine before the start - not something one would think was terribly helpful if you want to stay on a horse - but again the act is symbolic because of the symbolism of wine.