Unravelling the symbolism of the ermine is – shall we say – a challenge.  Its main and underlying symbolism in some countries has been overlayed with Christian symbolism in an attempt to eradicate its actual original meaning, as such how it is being used is dependent on the context.  In the description I will only describe its spiritual symbolism.  First let us look at the ermine itself.

Ermine is the name given to the stoat (Mustela erminea), when it is in its pure white winter coat.  It is a very very quick little animal that lives in burrows – tunnels -  and is distinguished from the weasel by its larger size and longer tail with a prominent black tip. In shape it somewhat resembles a dragon or the letter J. 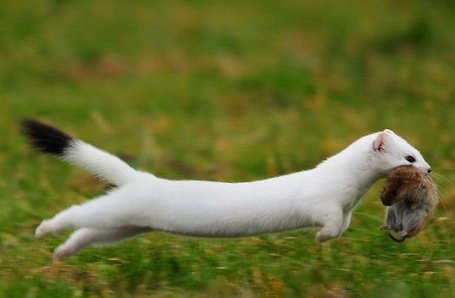 A male stoat is sometimes called a hob, or Jack, while a female is called a Jill.  So when Jack and Jill went up the hill, the Water they went to fetch may not have been water.  I hope you are beginning to see my gist.

According to one source “The ermine occasionally appeared in art as a symbol of pregnancy”, but in fact this would not be entirely true.  It appears more often as a symbol of false pregnancy, which is important, as we shall see.

Back to the animal. In the Northern hemisphere, mating occurs in the April–July period. In spring, the male's testes are enlarged, a process accompanied by an increase of testosterone concentration in the plasma. Thus the males are a symbol of extremely highly developed sexual energy.

In the folklore of the Komi people of the Urals, female stoats are symbolic of “beautiful and coveted young women”. In the Zoroastrian religion, the stoat is considered a sacred animal, as” its white winter coat represented purity”. Or at least temporary or even permanent chastity – a virgin.  Perhaps even a vestal virgin, a High Priestess.  Thus we have the combination of a highly sexually charged male animal paired with a Vestal Virgin like female.  Part of the Mystery.

Mary Magdalene was depicted as wearing a white stoat pelt, which if true lends a whole new dimension to how Jesus obtained his powers.

Ermine was at one time a fur only worn by Kings and Queens.  Eventually through a process of deterioration in the symbolism, ermine became a symbol of royalty and high status; the ceremonial robes of members of the UK House of Lords and the academic hoods of the universities of Oxford and Cambridge are traditionally trimmed with ermine.  It is unlikely that any of these are Kings and Queens.  The same can be said of the Prelates of the Catholic Church, who still wear ecclesiastical garments featuring ermine.

But Leonardo da Vinci’s Cecilia Gallerani, who is depicted holding an ermine in her portrait, Lady with an Ermine, may well have been a High Priestess of some ability.  She was his patron’s very young mistress.

Ermine has no black spots or patterning on it, but when used in ceremonial dress it has nail like spots over it.

In Japan, ermine are called "iizuna" or "izuna" (飯綱?) and in the Tōhoku Region and Shinshū, it was believed that there were families that were able to use ‘a certain practice’ to freely use kudagitsune as "iizuna-tsukai" or "kitsune-mochi". By doing so they obtained access to the gods, maybe they even became gods.

“In the Kitaakita District, they are called mōsuke (猛助), and are feared as yōkai even more than foxes (kitsune)”.  One presumes this would only apply to the male of the species.

According to Matthew Hopkins, a witch hunter general during the English Civil War, ermine were the familiars of witches.  But then he was a witch hunter.  So he called them witches.  Puritans were not very fond of the old belief systems.

And there is another layer to the symbolism: because the ermine’s coat turns brown in the Summer, but white in the Winter it is symbolic of a spiritual traveller in general and one who has gone the full round of the Four Seasons.

I am not going to tell you anymore, you are now going to have to work it out for yourself – possibly using the caduceus as the clue.