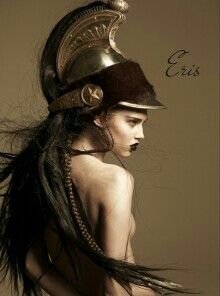 Greek mythology personifies the systems and functions of the universe.  And Eris is the  goddess of strife, her name being translated into Latin as Discordia. Her contrasting opposite is Harmonia, whose Latin counterpart is Concordia.

Hesiod initially made a distinction between the sort of strife that might be called argument, conflict and disagreement, and what we might call today competition or ambition.  Later, many of his other works and the works of other writers concentrated on the Eris who causes conflict – the troublemaker.

So, after all, there was not one kind of Strife alone, but all over the earth there are two. As for the one, a man would praise her when he came to understand her; but the other is blameworthy: and they are wholly different in nature. For one fosters evil war and battle, being cruel: her no man loves; but perforce, through the will of the deathless gods, men pay harsh Strife her honour due.

But the other is the elder daughter of dark Nyx, and the son of Cronus who sits above and dwells in the aether, set her in the roots of the earth: and she is far kinder to men. She stirs up even the shiftless to toil; for a man grows eager to work when he considers his neighbour, a rich man who hastens to plough and plant and put his house in good order; and neighbour vies with his neighbour as he hurries after wealth. This Strife is wholesome for men. And potter is angry with potter, and craftsman with craftsman, and beggar is jealous of beggar, and minstrel of minstrel.

She was thus the daughter [sub-function] of Nyx, the personifications of all functions of Darkness, hurt, HATE and destruction.

The most famous tale of Eris recounts her initiating the Trojan War by causing the Judgement of Paris. The goddesses Hera, Athena and Aphrodite had been invited along with the rest of Olympus to the forced wedding of Peleus and Thetis, who would become the parents of Achilles, but Eris had been snubbed because of her troublemaking inclinations. 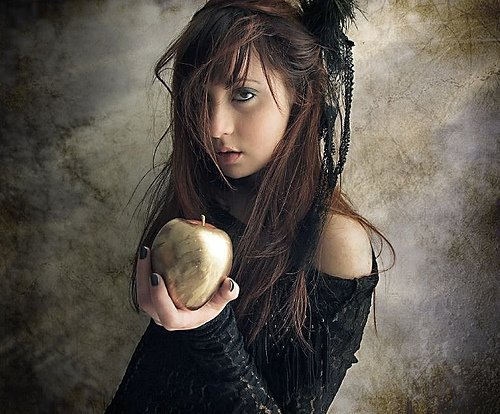 She therefore (as mentioned at the Kypria according to Proclus as part of a plan hatched by Zeus and Themis) tossed into the party the Apple of Discord, a golden apple inscribed τῇ καλλίστῃ (Ancient Greek: tē(i) kallistē(i))  – "For the most beautiful one", or "To the Fairest One" – provoking the goddesses to begin quarreling about the appropriate recipient. The hapless Paris, Prince of Troy, was appointed to select the fairest by Zeus. The goddesses stripped naked to try to win Paris' decision, and also attempted to bribe him. Hera offered political power; Athena promised infinite wisdom; and Aphrodite tempted him with the most beautiful woman in the world: Helen, wife of Menelaus of Sparta. While Greek culture placed a greater emphasis on prowess and power, Paris chose to award the apple to Aphrodite, thereby dooming his city, which was destroyed in the war that ensued.