The Djed is a pillar-like ancient Egyptian symbol. It is a column designed to look like a tree – a large lone tree.  It thus takes on the symbolism of both – a column or portal to the spiritual world.  The following picture shows stylistically that it has a substantial base and the column top is designed to look like foliage. 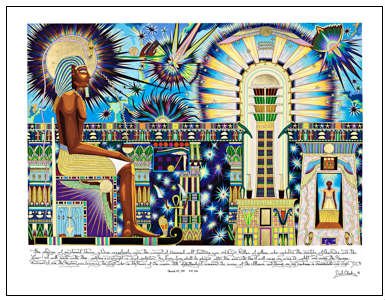 The Djed, therefore was another representation of the Tree.  [the spinal column and crown chakra ] In the picture we can see the ‘levels’ – levels and layers -  through which it passes marked on the column as well as a column head which also has levels.  Spiritual rays emanate from it indicating a symbol of considerable importance and power.

Djeds were physical manifestations of the column as it was seen in visions.  During the Renewal Festival, for example, the djed would be ceremonially raised as a fertility symbol.