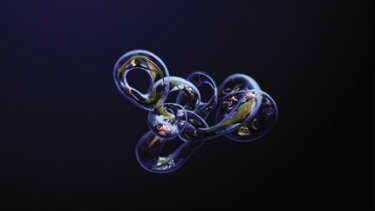 After having analysed this symbol, finding the one meaning - where Bubbles represented Spirit output, [although they more often represent one specific type of output, notably that of  Perceptions ] - an additional interpretation appeared.  It would seem that in some cases the bubble is a soul - a Higher spirit - in ascension.  Does it look like an orb or Egg?  Does it have a thin and semi-translucent skin?  Then it is a Higher spirit .

I was in some dark very thick but pleasant liquid.  Near to me was a vast wall of silvery substance.  I was with two very insubstantial spirits, white, ethereal and we were swimming, that is how I would describe it, swimming very gently in this liquid.  I had no sensations of shortness of breath or panic, in fact it was all very pleasant, I imagine it is how a baby must feel before it is born, weightless and floating.

Then we started to come across these bubbles of all sizes, beautiful semi transparent things in all colours – generally very soft colours with a sort of luminescent quality. Soft greens, pinks, primrose yellows, some blue ones, one red one -  quite a dark red, an odd purple one  and rainbow swirl effects.  One was almost black.  I think they were coming from the direction of the wall.

It is difficult to describe just how beautiful they were.  It was not long before we were surrounded by them, great clouds, anything from one foot to several feet across.  Some were huge like houses.  There were also really tiny ones, baby bubbles.  I felt one when the spirit said it was alright to.  They gave, but were quite robust, no chance of them bursting.  Your hand could go in and move around inside this very very thick liquid, warm and swirling swirling, swirling on the move all the time.  As you pulled your hand out the skin seemed to pull out and then heal itself where you’d put your hand through.  They were all going up and when I did look up they seemed to disappear miles above me.

The spirit wouldn’t tell me what they were.  It seemed to think I was rather thick for not understanding, as if it was obvious.  Nothing else happened and then the beacon sounded to come back.  The end of the exercise.

These were not in fact thoughts, but in many cases, Bubbles represent ‘thoughts’ .  It is presumably where we get the idea of thought bubbles from.  They may have first been seen as bubbles  and then translated to an image in pictures.

Sri Muruganar – from Ramana the Magician

What is this 'I' that rises from within?
Only a thought that like a bubble floats
Up to the troubled surface of Awareness.
In sleep the sea is still, no bubble rises,
Then too you are and are aware you are
You're not the 'I' that rises and sets
You are the sole Awareness in the All
The eternal, uncreated light of Being

Some people may have wondered why we value champagne so much.  Why should something that is basically fizzy wine be so expensive and used for marriages, and other celebratory occasions of happiness – like wedding anniversaries or birthdays?

Because the bubbles rise in champagne and the glass that is used is a perfect symbol of the hourglass – or if you prefer the Holy Grail!  And of course it is also wine.