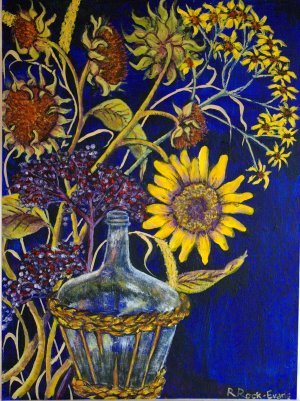 A bottle is another symbol for the body - the physical 'shell' which holds the spiritual us.  The symbolism ties in rather well with a host of other symbols.

Bottles can hold wine.  They can also hold Water - where the symbolism here is the same as that for Wine.  Bottles are cone shaped, but they have the added advantage symbolically in that their narrow neck is like the narrow neck through which we obtain spirit input and exude spirit output.

Bottles are also often found with Cups, chalices, glasses [particularly wine glasses] and goblets, which are all symbolic objects in their own right.

The symbolism of the glass is principally based on the receipt of spiritual input [shown blue] in the bowl of our cup, thus the end of the cone/bottle or the Higher spirit that resides in the spiritual realm at large.

A bottle is the provider of spirit, thus in some symbolic systems, the bottle is a living [bodied] person, who gives spiritual input to others as opposed to taking it.  A healer might be thus symbolically described as a bottle!  Giving out healing energy.

Some people just 'have a lot of bottle'.

A bottle of whisky should thus be a deeply revered object as symbolically it is both a bottle and a container of spirit [sorry I'm joking - or maybe I'm not].  Our neighbour Robert is well aware of this as he has often told us that he worships whisky.

There is some added interest provided if the content of any bottle is champagne.

'Being drunk', incidentally, in this context means being high on spiritual experience - ecstasy or better.  Which is why Leonard Cohen said

'I fought against the bottle, but I had to do it drunk'.