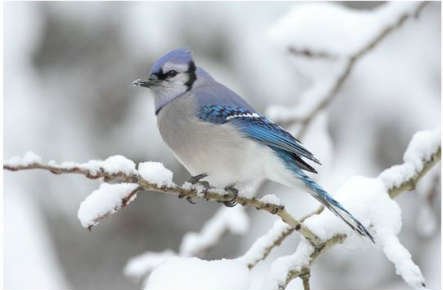 The Blue Jay takes on the symbolism of all birds.

The Blue Jay (Cyanocitta cristata) is a member of the family Corvidae native to North America.  It was a bird often chosen as a bird for shape shifting by shamans in North America where the Blue Jay can be found.

During the midwinter ceremonies of the Spokane, all persons with ‘blue jay power’ progressively lost their human characteristics.  They tore their clothes off, changed into blue jays and danced around with irregular steps characteristic of these birds.  Sometimes one could observe such ‘were-blue jays’ sleeping in branches of large trees or hopping from branch to branch.  Towards the end of the feast, they had to be caught and changed back to humans.  If they could not be seized and over powered, they had to continue living in the wilderness as ‘blue jays’.

Symbolically, if a shaman decided to 'become' a Blue Jay, he would assume as a consequence the characteristics of that bird............

Blue jays are, among the Corvidae, not closely related to other jays. It is adaptable, aggressive and omnivorous… It is sometimes assertive toward other birds and may chase birds from feeders or other food sources. ….Jays are some of the more intelligent birds.  The Blue Jay has a bad reputation as a raider of other birds' nests, stealing eggs, chicks, and nests.

Blue Jays are not noted for their song, as such almost their entire symbolism has derived from their characteristics and the fact they are birds and Blue and White.