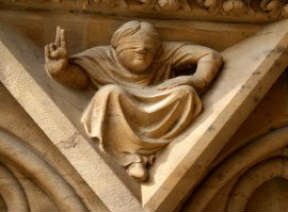 It was not uncommon for people in the initiation ceremonies for the spiritual path and in later activities related to phases on the path, to be blindfolded both to test their faith in those who were helping them and also to ensure they did not see what might happen to them.

Thus the symbolism of blindness in all nursery rhymes and poems is spiritually related to the act of initiation and stage completions.