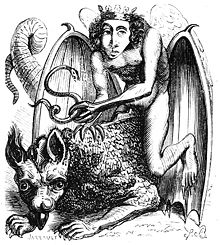 The Intelligence hierarchy has two parts to it – one related to the Sons of Light and the other the Sons of Darkness [see Darkness and Light].

The name "Astaroth" is first known from The Book of Abramelin, purportedly written in Hebrew c. 1458, and “recurred in most occult grimoires of the following centuries”. Astaroth also features as an important Son of Darkness associated with the Qliphoth according to later Kabbalistic texts.

According to Sebastien Michaelis, he is an Intelligence of the First Hierarchy, who “seduces by means of laziness, self-doubt, and rationalized philosophies”. His adversary is St. Bartholomew, “who can protect against him for he has resisted Astaroth's temptations”.

To others, he teaches mathematical sciences and handicrafts, can make men invisible and lead them to hidden treasures, and answers every question formulated to him. He was also said to give to mortal beings the power over serpents.

But Astaroth has especial significance in terms of Judgement and Judgement Day.  According to Francis Barrett (c. 1801), Astaroth is the prince of accusers and inquisitors. The Old Testament frequently makes reference to a ‘Divine Council’.  This Council is the one responsible for Judgement and by extension will be there on Judgement Day.  Zechariah 3:1-7 , for example, describes a vision wherein YHWH stands as the judge of a trial over Joshua, and at the right-hand stands Satan, whose role is the accuser, there prosecuting Joshua for his sins and disloyalty to God.  So Satan tests, accuses, tempts, is the council for the prosecution in all judgment and testing and sits at the right hand of God.  Astaroth is a key assistant.

3 And Samuel spake unto all the house of Israel, saying, If ye do return unto the Lord with all your hearts, then put away the strange gods and Ashtaroth from among you, and prepare your hearts unto the Lord, and serve him only: and he will deliver you out of the hand of the Philistines.
4 Then the children of Israel did put away Baalim and Ashtaroth, and served the Lord only.

In art, in the Dictionnaire Infernal (1818), Astaroth is depicted as a nude man with feathered wings, wearing a crown, holding a serpent in one hand, and riding a beast with dragon-like wings and a serpent-like tail.