The infrasound given off by volcanoes is used to monitor their activity and also predict the effects of plume dispersal………….

Continuous volcanic infrasound signal was recorded on a three-microphone network at Kilauea in July 2008 and inverted for near-surface horizontal winds. Inter-station phase delays, determined by signal cross-correlation, vary by up to 4% and are attributable to variable atmospheric conditions. The results suggest two predominant weather regimes during the study period: (1) 6-9 m/s easterly trade winds and (2) lower-intensity 2-5 m/s mountain breezes from Mauna Loa. The results demonstrate the potential of using infrasound for tracking local averaged meteorological conditions, which has implications for modeling plume dispersal and quantifying gas flux.

But oddly, I found little evidence that anyone in the scientific community was monitoring its effects on people.

Infrasonic signals from explosive volcanic eruptions have been observed for decades at Fairbanks, Alaska and Windless Bight, Antarctica as well as at many other infrasonic arrays around the globe.

If the eruptions are very large, such as that of Mt. Saint Helens in 1980, the infrasound that is generated by the explosion can propagate around the earth several times arriving at the infrasonic observatories from both the direct and the antipodal great circle paths. 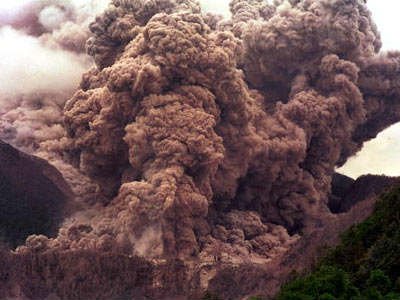 Infrasound has been recorded of eruptions of several volcanoes located at great distances from the monitoring stations – for example El Chichon in Mexico (6617 km), Galunggung in Java (8297 km), Awu in Indonesia (9471 km),  and Manam in New  Guinea (9358 km).

What sorts of frequency do exploding volcanoes typically have?  If we take the example of the eruption of Manam volcano in Papua New Guinea on January 27, 2005, a strong signal of around 0.03 to 0.10 Hz was measured on the 27th.

At Windless Bight on the Ross Ice Shelf there is an active volcano, Mt. Erebus, on Ross Island just 25 kilometers north of the infrasonic array. There have been hundreds of small infrasound-producing events in the lava lake in the crater of Erebus over the past few years. These small eruptions of Erebus produce signals in the passband from 0.1 to 10 Hz that usually last less than one minute with very low intensities.

There have been a series of eruption events of Augustine volcano in Cook Inlet Alaska on January 11, 13, 14, 17 of 2006 that produced infrasonic signals detected in Fairbanks. The background microbarom signals and the long period wind-noise oscillations were excluded from the signal by bandpass filtering giving a range of  [0.03 to 0.10 Hz].

So the signals – assuming one was not standing on the crater rim, would be classified as low intensity and very low frequency.

Volcanoes produce  infrasound of low intensity unless you are close to the volcano.  You can position yourself to be a reasonable distance away and thus not get high intensity sound.  It is ‘surround sound’ in that it will affect the whole body.

It works via Stimulation -  resonance of the organs of the brain by low frequency sound [infrasound] which can be of low or high intensity depending on the distance of the source from the person.  As we saw in the section on this mechanism, the intensity determines which organs are the ones likely to give you the experience.  The stimulation at low intensity works via the temporal lobe, amygdala, and reticular formation.  At high intensities, the stimulation works via other organs.

There are other organs in the brain [and body] which appear to have resonant frequencies in a similar range, thus given that resonance is frequency dependent, the frequency for resonating the organs mentioned needs to be very exact for anything to happen.  Resonance of the wrong organs at high intensity could make you ill.  And it does………. 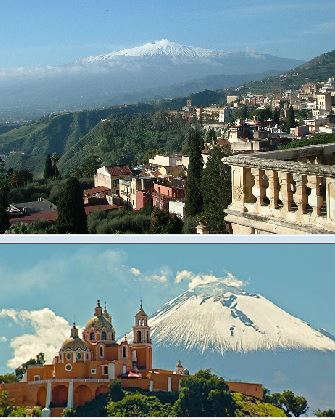 To complicate matters further, depending on the size of a person’s various glands and organs, the resonance frequencies of two people may differ.  Two people standing near a volcano together might get different results – one may get a profound experience, another may get nothing.

If the size of your amygdalae differ, for example, and the frequency is such that it stimulates only one side, you could end up being in deep deep deep despair during an eruption [stimulation of the left side] or as high as a kite ready to kiss the world [right side].

So living near a volcano may not be an entirely good idea.

Infrasound from natural sources is not targeted as it is with man-made controlled infrasound.  We get ‘surround sound’, it envelops us, there is no directional or controlled focussing at all.

Since the inherent frequencies of the human body and the organs are within infrasound vibration range, so infrasound has a stronger effect on the human body as a whole.    It is not just the brain that can be affected, all of us can depending on the size of our organs and their resonating frequencies .   The effects of natural infrasound are thus far more unpredictable than with targeted man made infrasound.

So it might be better to approach this by saying that any odd effects you might be experiencing near volcanoes might be attributable to the infrasound being generated. 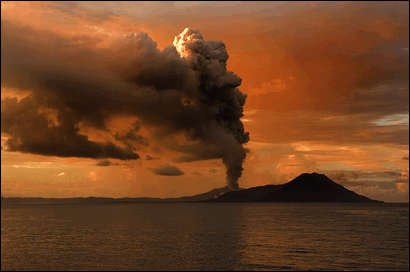