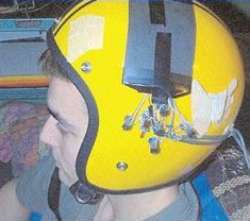 The rather provocatively named ‘God Helmet’ is a Transcranial magnetic stimulator.  It was actually originally called the Koren helmet after its inventor Stanley Koren and this is still its correct name.  It was and is a piece of apparatus fitting on the head that was intended to be used to study the effects of magnetic stimulation of the temporal lobes.  The apparatus, placed on the head of an experimental subject, generates very weak fluctuating (i.e. "complex") magnetic fields.

It was thus not intended to be used for therapy or for medical help but for ‘neurotheological’ research.  Despite the fact that stimulation was intended to be to the mesiobasal temporal lobes and thus in theory should only have resulted in improved perception, the close proximity of these with the hippocampus and amygdala appears to have had other effects of a more hallucinatory and visionary nature.

The device has been used experimentally and extensively by Dr Michael Persinger, a neuroscientist at Laurentian University in Sudbury, Ontario, Canada. Persinger has published a number of papers about the effects on the human brain of the "complex" magnetic fields generated by this and other similar devices. Many of his subjects have reported "mystical experiences and altered states" while wearing this helmet. 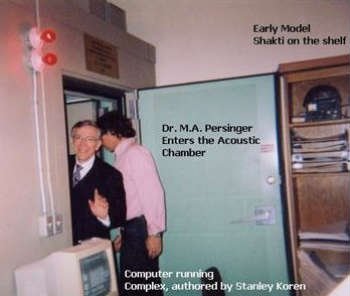 It acquired the nickname ‘God helmet’ because about 80 percent of his participants experienced a presence beside them in the room, which some said was ‘God’ but the more realistic realised was an experience of "another consciousness or sentient being".  People have had visions of ‘angels’, a deceased person known to the subject, or a group of ‘beings’ of some kind.

Persinger's group also used the helmet to study clinical depression. One study found "a significant improvement of depression and reduction of phobias" following application of the Helmet once a week for five weeks.

Persinger used a modified snowmobile helmet that incorporated solenoids placed over the temporal lobes. He also uses a device nicknamed "The Octopus" which used solenoids around the whole brain, in a circle just above subject's ears. Both of these devices produced "weak but complex" (1 microTesla) magnetic fields.

A computer was used to control the solenoids, the outputs of which were amplitude-modulated and non-sinusoidal (which Persinger refers to as "complex"). Most of the signals employed were derived from physiological sources, for example patterns that appear in EEG traces taken from limbic structures. Only one of the coils on each side of the helmet is active at any one time, and the active coil changes constantly, "rotating" counterclockwise over each temporal lobe.

The sessions were conducted with the subject seated in a comfortable chair in an acoustic chamber.   The acoustic chamber was also a Faraday cage shielding out all EMF emissions and radiation except the Earth's magnetic field.

Persinger observed that  during right temporal lobe stimulation the right hemisphere became more active, including the more sensitive structures in the limbic system. As this happened, the left side of the brain made fewer contributions to the subject's state of consciousness. The resulting state of consciousness was less verbal, as one would expect.

As one can imagine, the frequency of the magnetic fields was somewhat key as was the intensity of the fields.   It is likely that there will be many who have no experiences and probably quite a few that have some very odd ones.  Each person will have their own resonant frequencies, so there is no guarantee of anything happening.

The scientist and science writer Dr Richard Dawkins, appearing in the BBC science documentary series Horizon, felt at times 'slightly dizzy', 'quite strange' and had sensations in his limbs and changes in his breathing. All this tends to imply that the fields were resonating the brain stem where certain functions of the lungs and heart are controlled.

In contrast, the experimental psychologist, Dr Susan Blackmore said: "When I went to Persinger's lab and underwent his procedures I had the most extraordinary experiences I've ever had… I'll be surprised if it turns out to be a placebo effect."

The journalist Jack Hitt had experiences which were perhaps of especial note – he had both an out of body experience and perfect recall of perceptions – both of which are quite special !!