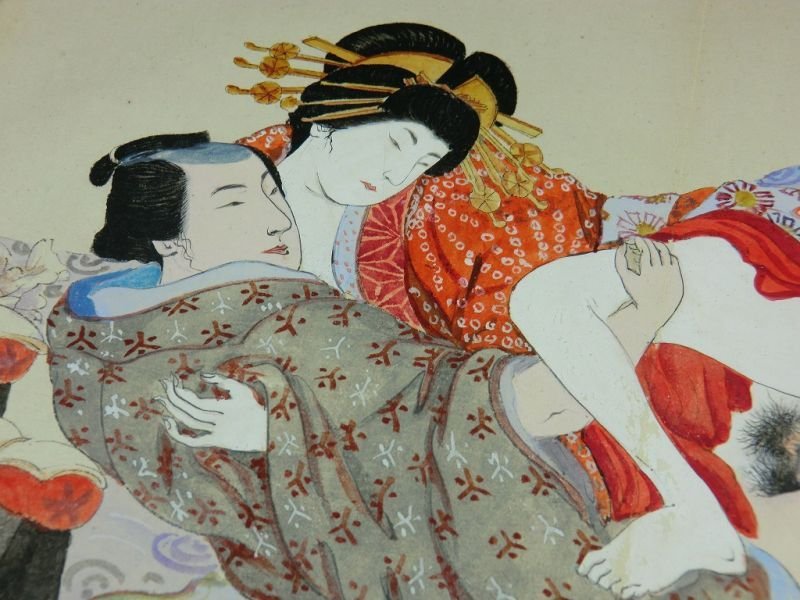 Throughout the website, where appropriate, we have used Shunga.  The following article helps to put in context what Shunga is and why we have used it, but it may also help to read the section on Repression.

The techniques of Making love, Sex Magick and Peaking to help with health and obtain spiritual enlightenment were never lost or repressed in the east, whereas they were quite viciously suppressed in the West, Shunga was simply the expression of the Joy of Sex and love, along with their understanding of the spiritual benefits one achieved from making love in all its forms.

Shunga: sex and pleasure in Japanese art at The British Museum

Shunga are beautifully crafted paintings of sexually explicit images of great delicacy and refinement, usually created in sets of 12. …. Over the centuries, hundreds of artists made shunga images and the genre spawned scores of variations, including the comic, the satirical, the grotesque and so on. 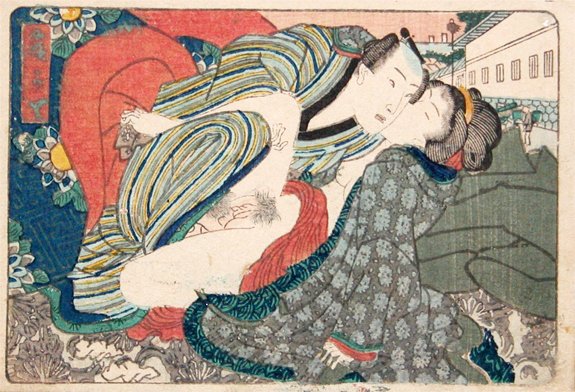 The cumulative impression is that there was no Shame.

Sex was for pleasure and for health. Some of the texts which accompany the images recommend sex as a vital part of a healthy lifestyle, to keep the heart and other organs functioning correctly, as the key to eternal youth.

In one image a man is stimulating a woman and catching the waterfall of her juices in a jar which he will later drink as the elixir of eternal youth.

And the Equality of Pleasure. 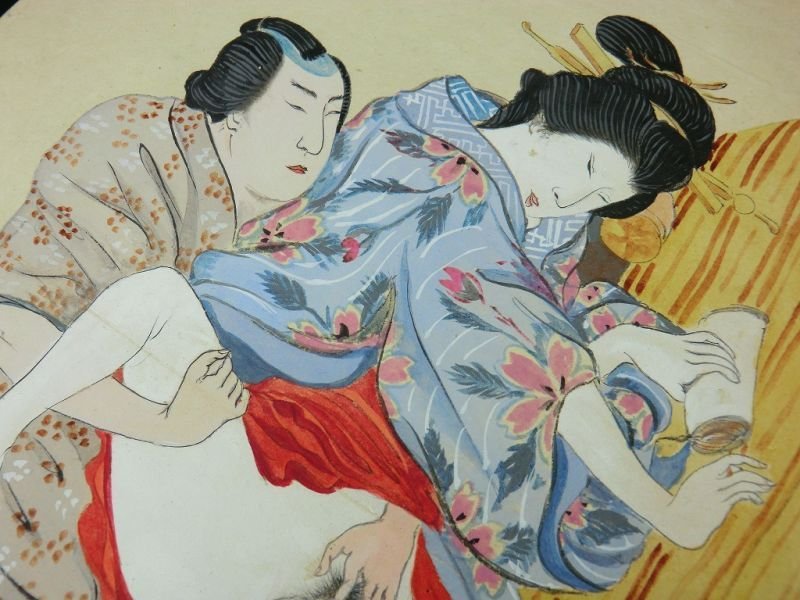 Women are seen as enjoying sex, as achieving climax, as being as cheeky and naughty as the men. In some scenarios one or more women trick a visiting man to have sex with her or them. A man is conned into a sack from which his dangling penis protrudes so he can have sex with a succession of women, all shown with their very hairy vaginas exposed and without any hint of Western concealment or embarrassment.

And then there’s a large amount of homosexuality: some lesbianism, but mostly a lot of men buggering each other. Again, despite our liberal times, I felt a frisson of concern or fear at acts which in my lifetime were still completely illegal in Britain being displayed so brazenly. But here they are, depicted openly, frankly, humorously. A scroll depicts with beautiful detail and humour sex between Buddhist priests and their acolytes from the 1300s. Apparently it was known as the ‘way of youths’ or shudo. 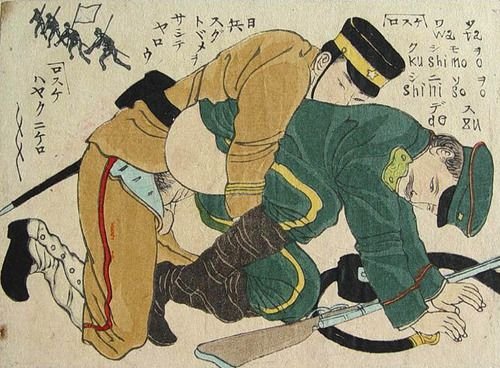 The exhibition includes a medieval scroll in which a bathhouse full of men compare the sizes of their comically enlarged penises, which need tables to rest on. This is followed by a section where they compare farts in a contest. All reminiscent of Chaucer and Rabelais.

One of the most striking things throughout is the contrast between the perfectly white and perfectly unblemished skin of the Japanese figures, with their stylised eyes, noses and mouths, the cleanness and purity of line with which they are portrayed – and the exaggerated, donkey-size penises and violently red vaginas which they display. The figures are often shown in anatomically impossible poses to ensure the penis and vagina are blatant, the unmistakable core of the image….. 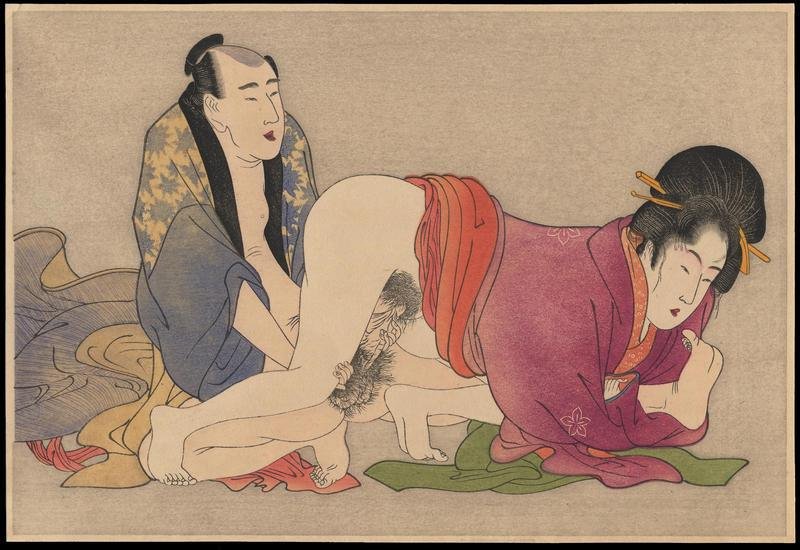 There was one whole genre of books which started with portraits of individuals done with great elegance and which ended with big close-ups of their penis or vagina, and the reader was expected to match the face with the genitals. According to Wikipedia ‘the genitalia is interpreted as a “second face,” expressing the primal passions that the everyday face is obligated by giri to conceal, and is therefore the same size as the head and placed unnaturally close to it by the awkward position.’

This is so far from Western ideas of decorum or art to be quite bewildering. 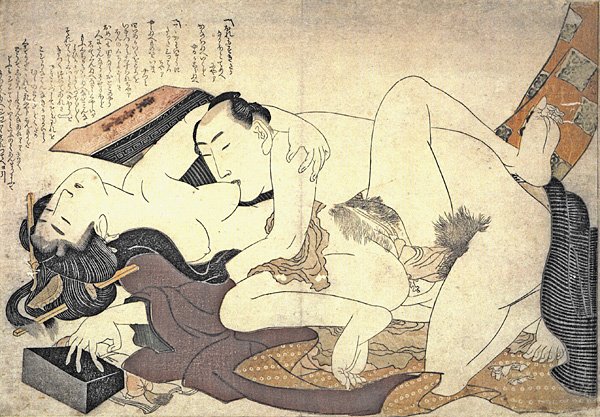 Shunga existed in the Middle Ages, became widespread as high class paintings in the 1600s, became mass-produced woodcuts from the 1650s. There were attempts to ban them in the 1720s and periodically through the 1700s but all indications are that they continued to circulate widely and be very popular. Only in the early 1900s as Japan’s leaders embarked on a course of self-conscious modernisation was shunga really systematically banned, and thereafter became a taboo genre for most of the 20th century.

It’s fascinating to see the influence of Western traditions intrude as Japan began opening up to the outside world from the 1860s onwards.  Western Victorian gentleman begin to feature in the illustrations, with precisely the same engorged organs and hairy tufts as the Japanese, but wearing incongruously prim frock coats and hats. 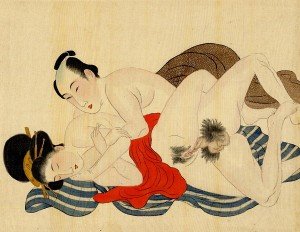 The saddest western import is the total nude. All of the Japanese images portray their figures dressed, with fabrics artfully falling away to reveal the genitalia, and the artful combination creates a wonderfully dreamy ‘floating world’ fantasy, a pornotopia of cost-free, risk-free sexuality. In the photographs which Westerners began to take in the late 19th century and which are exhibited here, we see all too clearly Japanese women stripped to the waist and exhibited like cattle. It’s impossible not to feel the heavy hand of Western sexual repression and its opposite, crude pornography, crushing the delicacy and gorgeous detail of the native tradition.