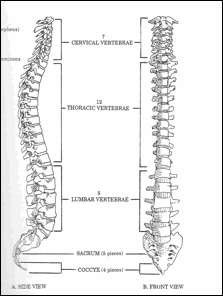 The sacrum  is a large, triangular bone at the base of the spine and at the upper and back part of the pelvic cavity, where it is inserted like a wedge between the two hip bones.

Its upper part connects with the last lumbar vertebra, and bottom part with the coccyx (tailbone).

It consists of usually five initially unfused vertebrae which begin to fuse between ages 16–18 and are usually completely fused into a single bone by age 34.

It is curved upon itself and tilted forward as well as being concave facing forward.

It looks like a cobra standing on its head.

The sacrum is called 'Xian Gu' in Qigong, which means 'immortal bone'.  This is because, in the advanced practises which lead the practitioner to Buddhahood or enlightenment, the Qi must be led upward through the coccyx and sacrum to the spinal cord to reach the brain and 'nourish the spirit'.

The aim of Marrow Washing Qigong, for example,  is to’ lead the Qi into the marrow’ and then further on to the head where it invokes the spirit – the Shen [or in our terminology the composer].

Although nerves do enter at various points on the spine, these are nearly all sympathetic [fight or flight].  There is also not the same opportunity to access the higher cervical vertebrae and the brain via trigger points as there is at the base of the spine , via the cervical vertebrae itself and via the key junction points.