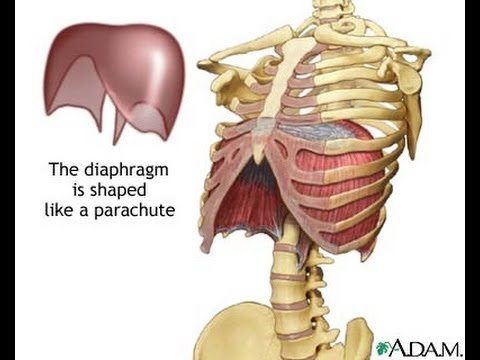 The respiratory system is that system in the body that is designed to carry gases to the cells in order that - simply put - they can be 'energised' - glucose can be turned into energy via oxygen.

The following description is helpful in describing how it works.

The job of the respiratory system is to facilitate the exchange of vital gases in the body.  Oxygen is taken in through the trachea or windpipe and pumped through a vast system of increasingly smaller tubes, which have the characteristic of letting some gases through to the blood and in turn taking waste gases (mostly carbon dioxide, or CO2) back to be exhaled.  This process is called "gas exchange." This takes place in the lungs.

The lungs themselves have no intrinsic muscles for breathing; instead, the diaphragm is the major muscle for breathing. It is a sheet-like muscle stretching from the backbone to the front of the rib cage that separates the chest cavity from the abdominal cavity. It forms a flexible, moving floor for the lungs. When the diaphragm is at rest, its shape is a double dome, and it extends upward into the chest under the lungs.

To start inhalation, the diaphragm contracts, flattens downward, and descends. This allows the lungs to fill. It displaces the abdominal contents, expanding the belly. The natural return of the diaphragm to its resting state occurs with exhalation. Other muscles involved in breathing include the inter-costal muscles (which act on the rib cage) and the scalene muscles (which raise the chest by lifting the first and second ribs). In some cases, the muscles of the abdominal area contract to push the abdominal contents upward and push upward on the diaphragm.

In the heart-lung system, special large molecules of a substance called "haemoglobin" carry the fresh oxygen to every part of the body. We are all aware of the problems that ensue when not enough oxygen gets across the respiratory tubules called pulmonary alveoli. Life-threatening conditions such as emphysema can cripple the body's ability to get enough oxygen and thus diminish function markedly. The role of CO2 is often overlooked, however.

To understand this process more clearly, consider the analogy of a milk truck trying to deliver individual bottles of milk to local stores. The oxygen is represented by the milk; the haemoglobin is the milk truck, and the store is the body tissue needing fuel to function properly. The dairy (the heart-lung system) loads the truck up with an excess of milk bottles, and the truck sets off on its appointed rounds. Once the truck arrives at the store, the cargo door must be opened wide enough to make an adequate delivery. Since CO2 controls the release of the oxygen from the haemoglobin, it would be seen as regulating the width of the door, so that in the scheduled time enough milk can be dropped off at the store. Not enough CO2 means an inadequate delivery and shortages.

In physiology, this oxygen dissociation function is known as Bohr's Law. It says that the oxygen can be "over-bound" to the haemoglobin, creating hypoxia or lack of oxygen, which can produce symptoms such as lightheadedness, heart pounding, cold hands, nervous emotional states, or even mental "fog."

Normal cortical blood flow can be interrupted by only a few minutes of Hyperventilation.

HV means that the lungs are releasing [into the atmosphere] too much CO2, because breath rate and/or tidal volume (the amount of air that is breathed out) exceed the level needed for the present conditions. This is often referred to as "over-breathing," or hypocapnia. …. the shift in blood flow…….. can be dramatic.

In fact, HV is used as an emergency room procedure to reduce bleeding in the brain.