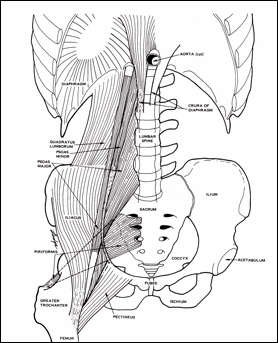 The recti abdominis insert into the pubes and attach to the centre of the pelvic rim, raising the anterior aspect of the pelvic basin and thus contributing to the horizontal position of the pelvis. The muscles counterbalancing the pull from the recti are the psoas regarded as one of the most significant muscles in the body.  The psoas unit is composed of two units the major and minor.

The psoas originates in the lumbar spine.  It runs along the anterior surface of the lumbar vertebrae for part of its length.  It also originates in close proximity to the two tabs of the diaphragm called the crura; through these neighbours, the psoas can be influenced by breathing patterns and can in turn influence the breathing.

The psoas tendon inserts at the head of the thigh bone on the inside of the leg.  Structurally it is a bridge between upper body and legs.