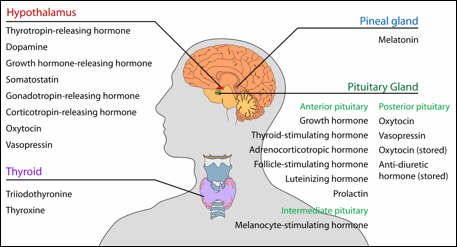 The pineal gland  - also called the  "third eye") is a small endocrine gland in the vertebrate brain. It produces the serotonin derivative melatonin.

Its shape resembles a tiny pine cone (hence its name), and it is located near the centre of the brain, between the two hemispheres, tucked in a groove where the two rounded thalamic bodies join.

In younger people, the pineal gland grows with the baby until he or she is about 1–2 years of age, then remains a stable size thereafter until the person reaches puberty.  The gland then grows again in line with the spurt of growth which appears during puberty.

The pineal gland is not isolated from the body by the blood–brain barrier system; it has profuse blood flow, second only to the kidney.

A calcified pineal gland does not produce melatonin as efficiently as one which is not calcified.  This is possibly why human melatonin production decreases as a person ages.