The Pennines in the UK are a range of hills that stretch like a spine down the backbone of England.  One area of the Pennines is now known as a ‘Spiritual window’ meaning it has a really enviable reputation for producing numerous spiritual experiences, from ghosts, to Ufos, to light balls and apparitions – hallucinations, visions and dreams.

Millstone Grit is the name given to a number of coarse-grained sandstones of Carboniferous age which occur in the Northern England. The name derives from its use in earlier times as a source of millstones for use principally in watermills. Sandstone is a clastic sedimentary rock composed mainly of sand-sized minerals or rock grains.  Most sandstone is composed of quartz and/or feldspar.

Millstone Grit occurs over a wide area of Northern England and parts of northeast Wales. A small area of Millstone Grit stretches through Flintshire and Wrexham into the northwest corner of Shropshire near Oswestry. 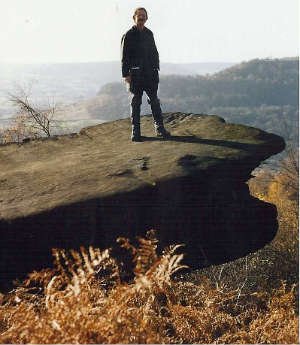 They are the major landscape-forming rocks of the northern part of the Peak District (the Dark Peak) and of its eastern and western flanks in the counties of Derbyshire, Staffordshire and Cheshire.

The great expanses of bleak moorland around Bleaklow and Black Hill are fringed with broken outcrops of gritstone and are characteristic of the area.

Towards the western margins of the Peak District are a rather more broken series of edges, facing in a variety of directions, from those surrounding the high plateaux of Kinder Scout and Combs Moss to the imposing crags of the Roaches, Hen Cloud and Ramshaw Rocks in the south.

All of these areas show signs of religious activity with cup and ring marks as well as standing stones and circles in large numbers. 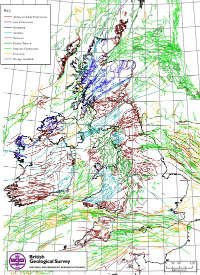 These rocks extend northwards through the South Pennines of Lancashire and West Yorkshire and westwards into the Forest of Rossendale and West Pennines and the Forest of Bowland also in Lancashire. At the Yorkshire Dales they cover the south-east edge, but north of the Craven Faults, due to weathering, they form only cappings to separate hills.

What marks this area out is that is found on an area of extremely high numbers of fault lines.

On the right is a map compiled by the British geological survey unit of the fault lines in the UK.  As you can see there are hundreds and hundreds, some near the surface and some lower down.