Other Illnesses caused by the Hepatitis family of viruses

Chronic sufferers of the Hepatitis viruses can suffer from liver disease that eventually leads to Liver cancer, which is especially associated with HBV and HCV:

Despite the availability of an HBV vaccine, 350-500 million people worldwide are chronically infected with HBV, and a significant number of these chronically infected individuals will develop hepatocellular carcinoma (HCC). Epidemiological studies indicate that chronic infection with HBV is the leading risk factor for the development of HCC. Globally, HCC is the second highest cause of cancer-associated deaths…PMID:  28042609

Hepatitis C virus (HCV) is a cause of liver diseases that range from steatohepatitis, to fibrosis, cirrhosis, and hepatocellular carcinoma (HCC). PMID: 23871966

But the Hepatitis viruses can cause other forms of cancer, as the virus travels round the body at times of low immunity including those caused by pharmaceuticals and stress.  Both HBV and HCV are associated with non-Hodgkin's lymphoma, for example

Hepatitis C virus (HCV) is one of the main viral causes of hepatocellular carcinoma (HCC) and is associated with lymphoproliferative disorder such as non-Hodgkin's lymphoma (NHL). PMID: 25252867

And there is an association with HBV and pancreatic cancer

And of the testicles

The purpose of our investigation was to evaluate the incidence of fibromyalgia syndrome (FMS) and identify FMS-related clinical symptoms in hepatitis B virus (HBV) patients…..The incidence of FMS, widespread body pain, fatigue, sleep disturbance, anxiety, morning stiffness, arthralgia was significantly greater among HBV patients relative to the control group. Additionally, the mean tender point counts and the visual analog scale values were significantly higher among the HBV patients PMID: 26133007

Sexually transmitted diseases (STDs) are caused by several pathogens, including bacteria, viruses and protozoa, and can induce male infertility through multiple pathophysiological mechanisms. Additionally, horizontal transmission of STD pathogens to sexual partners or vertical transmission to fetuses and neonates is possible. Chlamydia trachomatis, Ureaplasma spp., human papillomavirus, hepatitis B and hepatitis C viruses, HIV-1 and human cytomegalovirus have all been detected in semen from symptomatic and asymptomatic men with testicular, accessory gland and urethral infections. These pathogens are associated with poor sperm quality and decreased sperm concentration and motility. PMID:  25330794

The majority of cases of multiple myeloma that have been recorded in PubMed have been of viruses that have latency.  In effect, the person has the virus, it has become latent, but the person’s immune system becomes compromised by a poor diet or stress or, as we have seen above, all the pharmaceuticals [of which there are many] that suppress the immune system just when we need it most.  The correlation between MM and hepatitis viruses has been established

Serological analyses within epidemiological cohort and case-control studies indicate to an association between HBV infection and risk of multiple myeloma (MM). To verify the relationship with an independent approach, we investigated the correlation between HBV positivity and chromosomal aberrations within 680 patients of the National Center for Tumor Diseases Heidelberg …. The results provide further support for a role of HBV infection in the pathogenesis of MM.  PMID: 23033960

Increased prevalence of HCV infection in some lymphoproliferative diseases has been recently reported. In the present study, the frequency of anti-HCV antibody (Ab) together with hepatitis B surface (HBs) antigen (Ag) and anti-HBs Ab were determined in 42, 45 and 23 patients with essential mixed cryoglobulinemia (EMC), multiple myeloma (MM) and B-cell chronic lymphocytic leukemia (B-CLL), respectively. ….. these results confirm and extend previous reports on the possible role of HCV infection in the etiology of EMC and further suggest involvement of this virus in a subset of MM.  PMID:  11458277 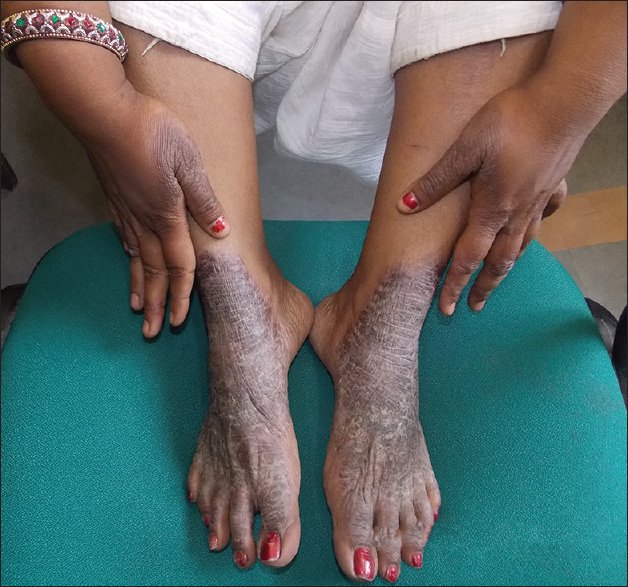 Necrolytic acral erythema is a cutaneous [skin] condition that is a manifestation of hepatitis C viral infection or zinc deficiency.  As zinc deficiency causes a reduction in immune system effectiveness the two may go hand in hand, as reduced immune system response may cause re-emergence of chronic HCV.

In fact, the virus appears to be ejected via the skin in quite a number of very unpleasant ways.  Lichen planus (LP) is a disease characterized by itchy reddish-purple polygon-shaped skin lesions on the lower back, wrists, and ankles and this too is a symptom of chronic but erupting HCV infection, as is Prurigo nodularis (PN), a skin disease characterised by pruritic (itchy) nodules which usually appear on the arms or legs. Patients ‘often present with multiple excoriated lesions caused by scratching’.

The hepatitis family of viruses, all appear to be implicated in gall bladder disease:

Although hepatitis A in adults is typically a benign, self-limited disease, it can occasionally have a fatal course. Acalculous cholecystitis is a frequent finding among adults with symptomatic hepatitis A.  PMID: 26768634

Hepatitis E virus (HEV) causes an acute viral hepatitis that is transmitted enterically. It is epidemic in Africa, Asia, the Middle East, and Central America. It is known that HEV can cause extrahepatic manifestations. Here, we report a case of acalculous cholecystitis as an extrahepatic symptom of HEV.  PMID:  27433137

The association between hepatitis B and autoimmune disorders has been intriguing for decades. Many reports have speculated on the possible linkage between these two conditions, yet never before data driven from a large national database was utilized in order to investigate this issue. The objective of this study was to investigate the association between SLE and hepatitis B carrier state. In a multivariate logistic regression analysis, SLE was significantly associated with hepatitis B…. Patients with SLE have a greater proportion of hepatitis B carrier state than matched controls.  PMID:  27423436

Other viruses may be implicated. 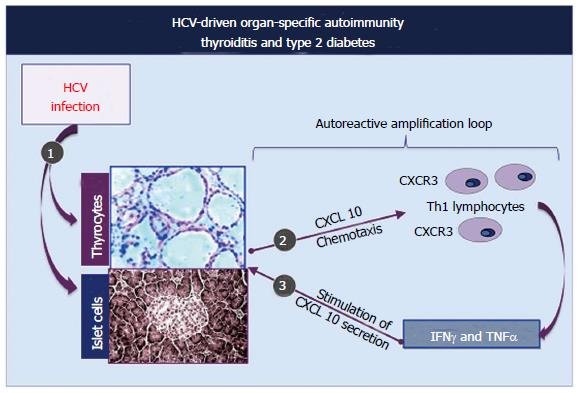 Thyroid dysfunction (TD) is more likely to occur in patients with chronic hepatitis C (CHC) and is particularly associated with interferon (IFN) treatment.   A total of 242 euthyroid patients with CHC treated with PEG-IFN/RBV were included [in the study]. Thyroid function and autoantibodies were measured at baseline, and virologic response and thyroid function were assessed every 3 months during therapy.  TD developed in 67 patients during the PEG-IFN/RBV treatment. The types of TD were subclinical hypothyroidism (50.7%), hypothyroidism (14.9%), thyroiditis (11.9%), subclinical hyperthyroidism (10.4%), and hyperthyroidism (10.4%). PMID:  26552454

For the first time, we have demonstrated that HCV can infect human thyroid cells in vitro. …… Furthermore, the thyroid may serve as an extrahepatic reservoir for HCV viral replication, thus contributing to the persistence of viral infection.  PMID:  23259732

Hepatitis B virus infection leads to multisystem manifestations owing to involvement of kidney, skin, vasculature, haematopoietic and nervous system. The hepatitis B infection can cause neuropathy …. or immune-mediated neural damage. In this submission, we report a young woman, who presented with mononeuritis multiplex and painful ulcerations as the first manifestation of chronic hepatitis B virus infection.  PMID:  23645658

Systemic necrotizing vasculitis (SNV) is an inflammation of blood vessel walls. It typically affects small and medium vessels. This inflammation can interrupt your normal blood flow. It results in skin and muscle damage, including necrosis. Necrosis is the death of tissues and organs.  About 30–50% of people with acute necrotizing vasculitis (polyarteritis nodosa) are HBV carriers.  But the other hepatitis viruses can also cause the disease

Cardiomyopathy with associated abnormal heart rhythms has also been reported with HCV.

HCV was strongly associated with ischemic ECG findings in this community study, and it could be a nonconventional risk factor for coronary artery disease.  PMID: 24335568

Our findings show that HCV infection may be associated with left ventricular systolic and diastolic dysfunction and cardiac arrhythmias.  PMID:  21886060

This paper is especially interesting as it highlights the fact that kidney donors may actually have hepatitis without knowing it:

Iran is known as an endemic country for hepatitis E virus (HEV) infection, while there are variations in the epidemiology of HEV infection throughout the country. The available epidemiological studies in different regions of Iran show HEV seroprevalence of 1.1%-14.2% among general population, and …. 30.8% among kidney transplant recipient patients.  PMID:  27298557

A number of diseases of the pancreas are caused by viruses including the Coxsackie virus, Cytomegalovirus, Hepatitis B virus, Herpes simplex virus, Mumps, and Varicella-zoster virus.

This study was to assess the role of hepatitis B virus (HBV) infection in pancreatic ductal adenocarcinoma (PDAC) ….Patients with pathologically confirmed PDAC (943) and 1128 matched controls were recruited from 2 hospitals. Chronic hepatitis B and inactive (HBsAg) carrier state (HBsAg positive) had a significantly increased risk of pancreatic cancer.  Significant interactions were found between a history of diabetes mellitus and chronic HBV infection for PDAC risk.  PMID:  22422136

Sjögren's syndrome is a chronic disease in which the body's white cells destroy the exocrine glands, specifically the salivary and lacrimal glands, that produce saliva and tears, and leads to the development of dry mouth and dry eyes   It appears to be caused principally by pharmaceuticals as of October 2016, about 1,100 drugs were implicated, but there is also a link between this disease and HCV.

Previous studies have suggested an association between hepatitis C virus (HCV) infection and the development of Sjögren's syndrome (SS), also known as sicca syndrome. The main objective of this study was to summarize the existing evidence …. by performing a meta-analysis of observational studies. ….. Based on meta-analysis of five cross-sectional and five cohort studies, a significant positive relationship between HCV infection and development of SS/sicca syndrome was found  PMID:  25263827

One very intriguing theory that has emerged from recent research is that a number of apparently inherited diseases are due to viral infection.  The virus mutates the genes of the fetus.

The increase in reactive oxygen species (ROS) after HBV infection causes inflammation, which leads to a further increase in ROS and ROS cause more than 20 types of DNA damage.   Oxidative DNA damage is mutagenic. In addition, repair of the DNA damage can cause epigenetic alterations at the site of the damage during repair of the DNA.  This has particular relevance to genetic mutations causing fetal damage.

To examine the impact of maternal hepatitis B virus (HBV) or hepatitis C virus (HCV) carrier status on pregnancy outcomes.  A population-based study was performed by comparing all pregnancies of HBsAg and/or anti-HCV seropositive women who delivered during the years 1988-2007 with all other pregnant women who delivered in the same period. ……Seven hundred and forty-nine hepatitis seropositive pregnant women were identified out of 186,619 deliveries (0.4%). Maternal characteristics, as well as perinatal outcomes, were comparable between the HBV and HCV carriers. HBV/HCV carriers had higher rates of

were noted in newborns of hepatitis carriers compared with the control group. Controlling for possible confounders such as maternal age and parity by using multivariable analyses, the significant association between HBV or HCV carrier status and perinatal mortality, congenital malformations and low birth weight remained significant.  PMID:  20214739


There is a very tentative link between cystic fibrosis and HBV.  It is not a gene mutation in the parents that cause the disease, but a mutation that occurs because the person is carrying HBV, and they may be doing so without symptoms because it has become largely latent or has been placed there by vaccination during pregnancy.