Although we hear of opium pipes and smoking opium, opium isn’t actually smoked – its vapours are inhaled.  You do not ‘burn’ any of the opium, instead the prepared opium is indirectly heated to temperatures at which the alkaloids vaporise.  The specially designed opium pipe used for this has a removable knob-like pipe-bowl attached by a metal fitting to a long, cylindrical stem. A small "pill" of opium about the size of a pea is placed on the pipe-bowl, which is then heated by holding it over an opium lamp, a special oil lamp with a distinct funnel-like chimney to channel heat into a small area. You lie on your side in order to guide the pipe-bowl and the tiny pill of opium over the stream of heat rising from the chimney of the oil lamp and inhale the vaporized opium fumes as needed.

Opium smokers claim that unlike injection or ingestion, smoking does not produce tolerance.  I do not believe them,  but this is what Jean Cocteau who was an addict and spent a large part of his life in clinics trying to kick the habit,  had to say. 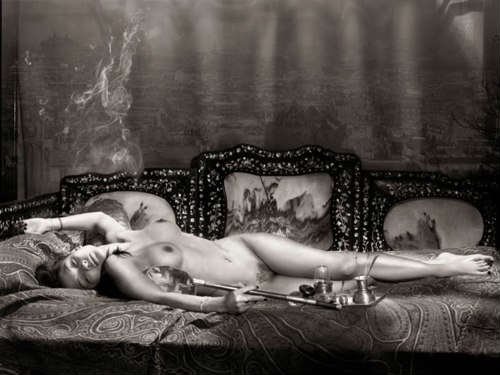 Opium – the Diary of his cure – Jean Cocteau

Opium – the Diary of his cure – Jean Cocteau

The lung is a sack of globules.  Each globule is divided into alveoli which lead direct to the bronchi.  One globule imitates the entire lung of a frog.  The smooth internal surface is tapestried with a network of blood capillaries.  In this way, if the lung were spread out, and ironed over, it would cover 200 square yards.  You have read aright.

Smoke therefore, impregnates at one stroke 150 square yards of pulmonary surface.  The blood mass of the lung, which is only 7/1000ths of a millimetre thick, amounts to 2 pints.  Given the speed of pulmonary circulation, one can imagine the quantity of blood which passes through the respiratory apparatus.  Hence the instantaneous effects of opium of the smoker.