A neurotransmitter is a type of chemical.  Within the Physical nervous system, a neuron affects other neurons by releasing a neurotransmitter that binds to chemical receptors. At the synapses, a store of these chemical messengers – neurotransmitters – is kept ready for release.  You can see this in the diagram below from Wikipedia.  The axon terminal of one cell connects up with another neuron's dendrite, via a synapse.

The effect upon the target neuron is determined not by the source neuron or by the neurotransmitter, but by the type of receptor that is activated. A neurotransmitter can be thought of as a key, and a receptor as a lock: the same type of key can here be used to open many different types of locks. 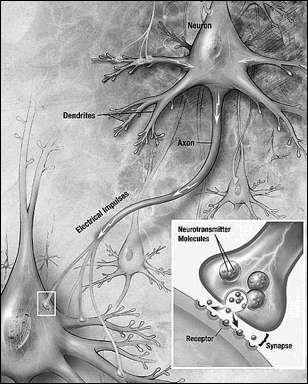