Indigenous peoples are one of my types of source for this website.  Indigenous societies have a long history of involvement in the spiritual.  They are usually [but not always] drug takers, they often use other forms of proven mechanism to induce spiritual experiences – such as trance, meditation, fasting, isolation, and lucid dreaming – and have a proven record in spiritual healing and the use of plant medicines.  Most indigenous people take it as fact, not a hypothesis that the spiritual world exists and this is because they have experienced it themselves. 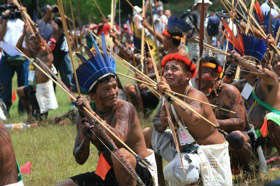 Their history and literature is full of legends and myths concerning the spiritual world, as such they share the advantages of the poets and writers in providing often beautiful and richly lyrical accounts of creation and the world of the spiritual.  The difficulty is thus not in the quantity or quality of the literature, but in its interpretation.

I homed in on the following people in particular because literature was widely available, of a high standard and accessible

Please note however that this list is not exhaustive, just representative.