The clitoris, the penis and the scrotum are all trigger points, for probably obvious reasons to most people.  The clitoris is the female sexual organ and most sensitive erogenous zone.  The head  of the human clitoris is roughly the size and shape of a pea, and is estimated to have more sensory nerve endings than any other part of the human body -  an  estimated 8,000 nerve endings (for its glans or clitoral body as a whole), the human penis (for its glans or body as a whole) is estimated to have around 4,000.

The clitoris and penis are generally the same anatomical structure, although the clitoris is not used for weeing.  “Upon anatomical study, the penis can be described as a clitoris that has been mostly pulled out of the body and grafted on top of a significantly smaller piece of spongiosum containing the urethra.” 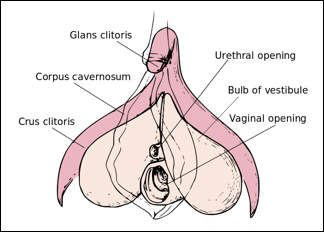 If you think it looks like the wishbone of a chicken you would be right, but why we pull a wishbone at Xmas is anybody’s guess………………….