My mate keeps drinking brake fluid. He says he's not addicted because he can stop whenever he wants.

Gasoline or petrol is a toxic translucent, petroleum-derived liquid that is primarily used as a fuel in internal combustion engines. It consists mostly of organic compounds obtained by the fractional distillation of petroleum, enhanced with a variety of additives.  The bulk of typical gasoline consists of hydrocarbons, but the actual contents can vary enormously between refinery streams which blend the gasoline according to the final market.  Just some of the additives and ingredients include:

In effect, anyone sniffing or huffing gasoline can be inhaling a combination of all these [toxic] substances! 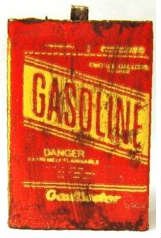 Inhalation of gasoline leads to permanent injury and death.  The ethanol [alcohol] added may result in some inebriation, the endorphins triggered by the body reacting to likely death from the toxins or hypoxia may give you a sort of odd high, but none of this is remotely spiritual. The risks include

Some of the problems used to be the lead in the petrol, thus in theory some of the problems ought to have been removed once lead was removed, but in practise, so many other additives with equally dangerous toxic effects are present that the removal of the lead has had little effect -  the brain damage and organ damage is still a reality.  The following scientific studies all provide evidence of this.

BACKGROUND:
A toxic encephalopathy (or 'lead encephalopathy') may arise from leaded gasoline abuse that is characterised by tremor, hallucinations, nystagmus, ataxia, seizures and death. This syndrome requires emergency and intensive hospital treatment.

METHODS:
We compared neurological and cognitive function between chronic gasoline abusers with (n=15) and without (n=15) a history of leaded gasoline encephalopathy, and with controls who had never abused gasoline (n=15).

RESULTS:
Both groups of chronic gasoline abusers had abused gasoline for the same length of time and compared to controls, showed equivalently elevated blood lead levels and cognitive abnormalities in the areas of visuo-spatial attention, recognition memory and paired associate learning. However, where gasoline abusers with no history of leaded gasoline encephalopathy showed only mild movement abnormalities, gasoline abusers with a history of leaded gasoline encephalopathy showed severe neurological impairment that manifest as higher rates of gait ataxia, abnormal rapid finger tapping, finger to nose movements, dysdiadochokinesia and heel to knee movements, increased deep tendon reflexes and presence of a palmomental reflex.

CONCLUSIONS:
While neurological and cognitive functions are disrupted by chronic gasoline abuse, leaded gasoline encephalopathy is associated with additional and long-lasting damage to cortical and cerebellar functions.

Furthermore, if you don’t die you can so mess up your mind that you don’t know what you are doing or become violent, dangerous and even permanently psychotic.

Volatile substance abuse (VSA, solvent abuse, 'glue sniffing'), carries a risk of sudden death (some 700 deaths in the UK, 1996-2006). However, mortality data take no account of the social cost of the habit.

From press cuttings we have identified 508 instances (569 individuals: 507 male, median age 25 yr, range 8-51 yr and 62 female, median age 18 yr, range 11-36 yr) where VSA, either alone or together with alcohol/other drugs, was reported in association with criminal or antisocial behaviour that resulted in a criminal conviction or caution. The frequency of reports decreased from 84 per annum (1997 and 1998) to 20 (2007). The agents reported (17 individuals, two agents) were

The offences cited (most serious crime) were:

Thirty offenders were given life sentences or detained indefinitely under mental health legislation. Reports came from all parts of the UK, although most were from Northern England, Northern Ireland, and Scotland.

There were many reports of recidivists; one 34-year-old male had made 113 court appearances, and had spent approximately nine years in custody. Although there are severe limitations to data derived from press cuttings and notwithstanding that in some cases VSA may have been raised in mitigation, these data provide an additional insight into the problem posed by VSA in the U.K.