Cranial Electrotherapy Stimulation (CES) is a psychiatric treatment that applies a small, pulsed electric current across a patient's head. Low intensity and pulsed.

It has been used to help treat  anxiety, depression, insomnia and stress.  It is also known by the names of electrosleep therapy; Cranial-Electro Stimulation, and Transcranial Electrotherapy.  In 1972, a specific form of CES was developed by Dr. Margaret Patterson, providing small pulses of electric current across the head to ameliorate the effects of acute and chronic withdrawal from addictive substances. She named her treatment "NeuroElectric Therapy (NET)".

In the United States, CES technology is classified by the Food and Drug Administration as Class III medical devices and must be dispensed by or on the order of a licensed healthcare practitioners, i.e. a physician, psychiatrist or nurse practitioner; psychologists, physician assistants, and occupational therapists who have an appropriate electrotherapy license may prescribe CES, dependent upon state regulations.

CES is non intrusive.  Electrodes are simply attached to the ear lobes or placed at various positions on the ear.    Do not take the diagrams below as anatomically exact, but as indicators to show the approximate effects of the positioning used.   As we can see from the diagram top left, this may put the placement near enough to stimulate the amygdala, the hippocampus, the reticular formation plus a number of other organs – depending of course on the frequency used and the depth of penetration of the signals. 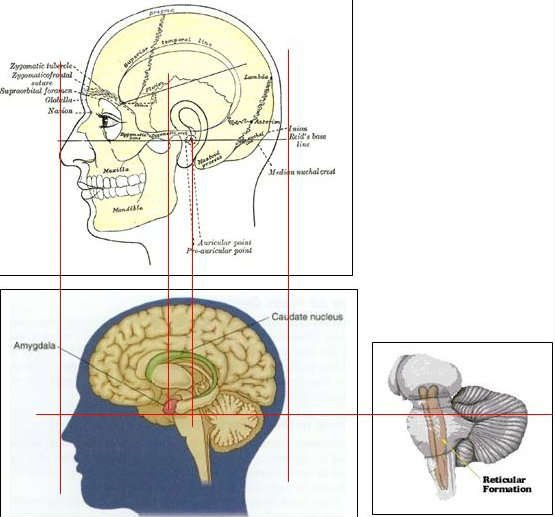