Auroras and University of Alaska

The good people of the University of Alaska in Fairbanks have found that  high trace-velocity infrasound episodes are often directly associated with periods of geomagnetic and auroral activity. The episodes have been observed throughout the year at the infrasonic arrays at I53US in Fairbanks and I55US in Antarctica. They have a maximum frequency of occurrence around the equinoxes.

At infrasonic arrays in Alaska, in Inuvik NWT, Canada, and at Kiruna in Sweden many impulsive large amplitude auroral infrasound signals were found to be related to specific auroral arcs in the auroral displays overhead. These signals were identified as bow-waves that are generated by the supersonic motion of auroral arcs that contain strong electrojet currents, (see Wilson, C.R., Auroral Infrasonic Waves, J. Geophys. Res, Vol 74, 1812-1836, 1969).

These auroral infrasonic bow-waves were named ‘AIWs’. The AIW infrasound is highly anisotropic [Anisotropy is the property of being directionally dependent]  propagating as a bow-wave moving in the same direction as that of the auroral arc motion. The AIW trace velocity across the microphone array is the same as lateral motion velocity of the supersonic auroral arc.

Infrasonic wave episodes of long-duration high coherency wave trains with very high trace-velocities have been observed, in the passband from 0.015 to 0.10 Hz, over the past 35 years at many different high latitude infrasonic arrays in Alaska, Canada, Sweden and Antarctica.

An example of the wave-train of a very large AIW bow-wave observed at I53US on Sept. 11, 2005 (day 254) at 08:47 UT is shown in Figure 1. The pressure versus time traces from all eight sensors at I53US have been phase-aligned and superimposed in Figure 1 to show the high coherence for the signal across the array. The observed AIW trace velocity and back-azimuth are 0.559 km/sec and 46.7 deg. respectively. The peak-to peak amplitude of this AIW is about 0.9 Pascal. There was daylight at I53US at the time of the signal in Figure 1 thus no aurora video data is available.. 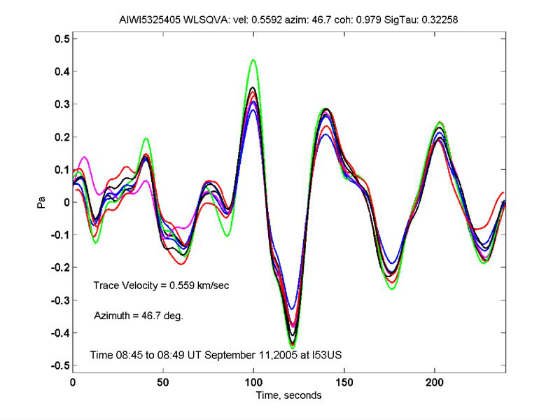 Solar flare impacts strike the earth like a bell. But continual minor background disruptions also exist. In its normal process, solar expulsions do not arrive at the atmospheric boundaries as a homogeneous pressure wave. The arrival of solar products comes as a pressure wave of inconsistent density. This intermittent barrage induces harmonic atmospheric disturbances. The effect is exactly like "thrumming" an evenly sanded drumhead with innumerable impacts.

Both solar flares and the normal thrummings of the solar wind generate infrasonic pulses throughout the atmosphere. The infrasonic shockwaves of the aurora are normally not heard, but definitely sensed. Measurements have registered a continual infrasonic background noise level. This pressure energy emanates "from above" atmospheric strata, radiating downward in large patterns.

This new type of auroral infrasound signal has been identified at both I53US in Alaska and I55US in Antarctica and is frequently associated with the pulsating auroras occurring during an auroral substorm’s final hours following the dynamic “break-up” phase of the bright auroral arcs.

Because of the large positive temperature gradient with increasing height in the atmosphere above the 100 km level, infrasound radiated from pulsating aurora patches at 120 km is refracted strongly downward. The PAIW ray path travel times from the 120 km level to the surface vary from 250 seconds for a source overhead to 320 sec. for a source 100 km from the zenith.

At I53US on November 19, 2003 at Fairbanks there was a large geomagnetic and auroral substorm that produced high trace velocity infrasound signals from 08:00 to 18:00 UT during a time when the clear night sky allowed good all-sky video data of the auroras to be recorded. Specific PAIW signals, as shown in Figure 2 , were observed from 10:40 to 10:50 UT that are associated with visible pulsating aurora forms that were positioned within a circular area of the sky of radius 50 kilometers above Fairbanks. The infrasonic waveform data in Figure 2 were passband filtered from (0.02 to 0.08 Hz). Signals similar to the PAIW shown in Figure 2 continued for 10 hours well into the daylight hours at Fairbanks.. 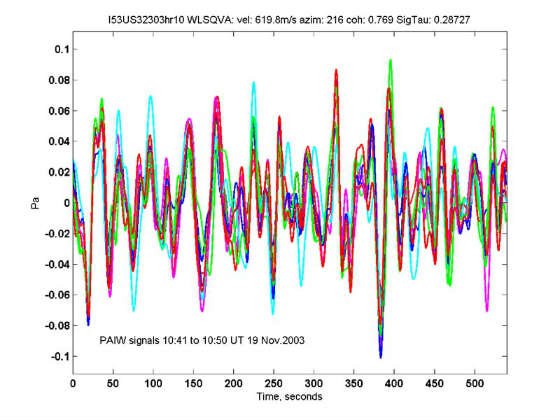 Spectral analysis of the aurora indicated that there was an enhancement of the auroral luminous energy in the passband from ( 0.1 to 0.5 Hz) during periods when visible pulsating auroras were in the field of view of the camera.

Occasionally it is difficult to distinguish between the signals from microbaroms and the aurora.  For example, the principle energy peak in one spectrum of signals measured by the detectors occurred at about 0.18 Hz with a period of 5.6 seconds  -  similar to that of microbaroms. But the very high trace velocity of 1.145 km/sec for PAIWs is three times larger than that of microbaroms. This allows for unambiguous identification of the PAIW high frequency signals.

We have seen that PAIWs have been monitored in Alaska, but continuous type PAIW auroral infrasound signals, as distinct from the AIW bow waves, have  also been observed at I55US in Windless Bight, Antarctica.

The geomagnetic latitude of I55US in Antarctica is 79.72 deg South while I53US in Fairbanks is at 65.12 deg North. Thus I55US is almost 15 deg. farther toward the South magnetic pole than I53US is from the North magnetic pole. Therefore, in theory,  one should not expect the auroral infrasound to be identical at I53US and I55US.

However on October 29, 2003, during a global magnetic storm following a very large solar flare, in the time period from 15 to 17 UT the simultaneous observations of auroral infrasound occurred at both I53US and I55US. In late October in Antarctica at I55US there is 24 hours of daylight and thus no aurora, if present, could have been observed. The infrasound wave train had a trace velocity, coherence and a spectral content similar to that seen at I53US during the same time interval from 15 to 16 UT. Thus these I55US infrasound signals are almost certainly associated with the auroral and magnetic storm that produced similar PAIW signals in Alaska at I53US.

PAOW infrasound can be received for many hours, meaning that a spiritual experience is far more likely as long as the frequencies are right.  At the I53US array high trace velocity, for example,  coherent PAIW infrasonic signals were received in association with the auroral activity from hours 12 through 23 UT on day 339.  The propagation time from the pulsating aurora source overhead at a height of 120 kilometers to the surface was about 5 to 6 minutes.