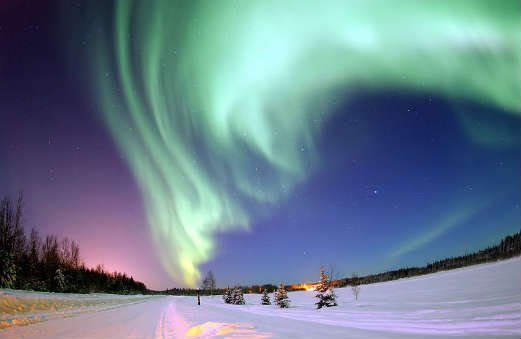 The  aurora is a natural light display in the sky particularly in the high latitude Arctic and Antarctic regions.  Most aurorae occur in a band known as the auroral zone which is typically 3° to 6° in latitudinal extent and at all local times or longitudes. The auroral zone is typically 10° to 20° from the magnetic pole. During a geomagnetic storm, the auroral zone will expand to lower latitudes.

In northern latitudes, the effect is known as the aurora borealis (or the northern lights), named after the Roman goddess of dawn, Aurora, and the Greek name for the north wind, Boreas, by Pierre Gassendi in 1621. Auroras seen near the magnetic pole may be high overhead, but from farther away, they illuminate the northern horizon as a greenish glow or sometimes a faint red, as if the Sun were rising from an unusual direction.

Its southern counterpart, the aurora australis (or the southern lights), has almost identical features to the aurora borealis and changes simultaneously with changes in the northern auroral zone.  It is visible from high southern latitudes in Antarctica, South America and Australia.

Both the aurora borealis and aurora australis are  caused by the solar wind and the collision of energetic charged particles with atoms in the high altitude atmosphere (thermosphere). The Earth is constantly immersed in the solar wind, a rarefied flow of hot plasma (gas of free electrons and positive ions) emitted by the Sun in all directions. The solar wind usually reaches Earth with a velocity around 400 km/s. During magnetic storms, in particular, flows can be several times faster.

The charged particles are directed by the Earth's magnetic field into the atmosphere. The Earth's magnetic field traps these particles, many of which travel toward the poles where they are accelerated toward Earth. Collisions between these ions and atmospheric atoms and molecules cause energy releases in the form of auroras appearing in large circles around the poles. Auroras are more frequent and brighter during the intense phase of the solar cycle when coronal mass ejections increase the intensity of the solar wind. 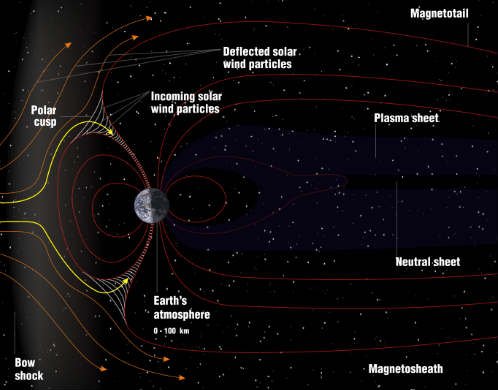 Earth's magnetosphere is formed by the impact of the solar wind on the Earth's magnetic field. It forms an obstacle to the solar wind, diverting it, at an average distance of about 70,000 km forming a bow shock 12,000 km to 15,000 km further upstream. The width of the magnetosphere abreast of Earth, is typically 190,000 km, and on the night side a long "magnetotail" of stretched field lines extends to great distances.

The magnetosphere is full of trapped plasma as the solar wind passes the Earth. The flow of plasma into the magnetosphere increases with increases in solar wind density and speed. Magnetospheric electrons which are accelerated downward by field-aligned electric fields are responsible for the bright aurora features. The un-accelerated electrons and ions are responsible for the dim glow of the diffuse aurora.

Large magnetic storms are most common during the peak of the eleven-year sunspot cycle or during the three years after that peak.  Geomagnetic storms that ignite auroras actually happen more often during the months around the equinoxes. The solar wind blows more rapidly from the Sun's poles than from its equator, thus the average speed of particles buffeting Earth's magnetosphere waxes and wanes every six months. The solar wind speed is greatest – by about 50 km/s, on average – around 5 September and 5 March when Earth lies at its highest heliographic latitude.

High trace velocity infrasound (PAIW), with Vt > 0.60 km/sec, is often observed at Fairbanks when pulsating auroras are visible in the dark skies overhead. A typical average trace velocity for PAIW event is 1.52 Km/sec.

PAIW infrasound occurs in the passband from 0.02 to 0.5 Hz with p-t-p amplitudes up to 0.30 Pascal.  PAIW events at I53US are observed most often in the morning hours after the auroral “break-up” phase, however they have been observed at all times of the day.  The seasonal variation in PAIW events is the same as that of the auroral activity.

It is extremely difficult to separate the infrasound effects of the aurora borealis and those generated by the fluctuating magnetic fields created by the solar wind.  No one should be able to hear the infrasound generated, but there are reports of sounds being heard – a "swish, crackle, sizzle, and ... thunder". But of course if the geomagnetic disturbances are affecting equipment or any metallic object nearby, these sounds will be all too real.  The effects are combined ones.

Low level auroras can be actually seen and felt – but only because of their geomagnetic properties. The sounds and odours associated are unmistakable. In one instance a chemist was fortunate enough to have lived, after witnessing the effect of ‘auroral grounding’ in his laboratory. He noted that an ‘incredible luminescence was produced in several platino-cyanides, and electro-phosphorescent chemicals’.

Another incident caused by the geomagnetic effects and not the infrasound involved an elevated radio tower. The radio engineer suddenly heard a crackling sound "from everywhere", was unable to transmit any signal power, felt ‘completely electrified’, smelled ozone everywhere, and heard the "crackling" sound. A number of witnesses who saw the event, described a coloured column of light, which suffused the tower, saying they ‘feared he might have been killed by its power’.

But, the auroral high-pitched sizzling sounds are occasionally augmented by deep and ominous ‘thrumming’ and this may well be the infrasound. These deep tones ‘sweep through the bodies of listeners’. The effects of the infrasound varies enormously depending on the frequency but there have been recorded instances of ‘irritability and a dizzying nausea’.

Clearly neither of these can be classified as spiritual experiences, but it is worth noting that the aurora and its thrumming were equated with evil by the Eskimo. Their legends of the aurora are always fear-filled. The trademark of anxiety and dread highly characteristic of infrasonic influence, their tales also recount the "taking" of souls by the "ground walking" aurora.

An aurora borealis which appeared in 1938 all over the northern hemisphere, including in places as far south as North Africa, Bermuda, and California was the widest occurrence of the aurora since 1709.  Just over a month later, Adolf Hitler seized Austria, and eight months later Nazi Germany invaded Czechoslovakia.

On an entirely practical note it is worth noting that Europe's coldest period in 500 years began during the January of 1709, lasting three months and with its effects felt for the entire year. In France, the coast of the Atlantic and Seine River froze, crops failed, and 24,000 Parisians died.  But this is not spiritual.