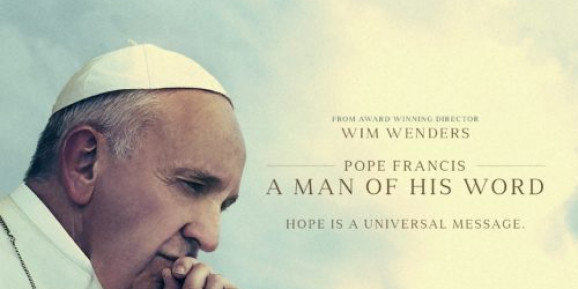 POPE FRANCIS - A MAN OF HIS WORD – Official Trailer [HD]

Did you approach the pope film similarly as your docs on artists?

No. The approach I took was that I wasn’t interested in his biography. It was not going to be in any way biographical. It wasn’t a film about the person, it was a film about the person’s hope and desires for the church and for mankind. I didn’t want to have a talking heads film. I wanted him to speak in an eye-to-eye situation to the person watching.

What surprised you about him?

We met for four long afternoons. Of course, I had read everything he had written before I met him, so it was already as if I knew him. And then it was still a surprise. It was still amazing how he came completely alone, without any bodyguards, without any entourage, extremely present and extremely prepared to just be there for us. He didn’t have a mobile phone. He was very attentive and said hello personally to each member of the crew, and he took his time for each and everyone before and after and treated everybody alike.

Did you address church controversies like the sex-abuse scandals?

We addressed all of these. He didn’t shy away from anything. I could have had him talk for 10 hours. I had cuts where he was talking for two and a half hours, but I realized that no one can grasp more than these 90 minutes because it is quite demanding to follow one person and his train of thought. So some issues were treated shorter than they could have been. But that was my choice: The Vatican didn’t object to any cut, and I had final cut anyway.