Although the concepts of a sacred architecture and geography apply and are used by a great number of mystic groups and systems, Shaivism takes it just that little bit further, by using actual geometrical measurements not just the symbols.  It is a scale model of the sacred.

Furthermore the same mathematical principles are used in music, which attempts to map the sacred relationships between the levels and layers to musical pitches. 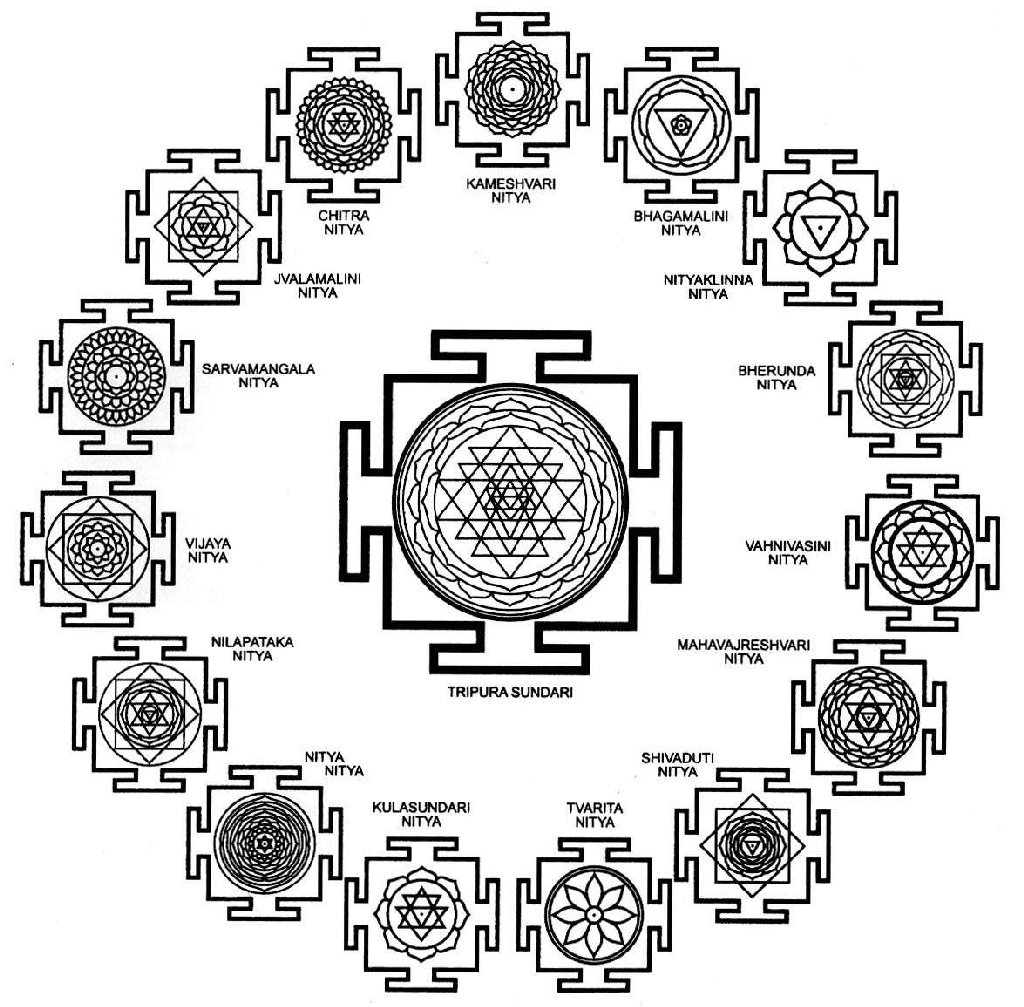 ALL aspects of creation correspond to basic formulae that can be portrayed by means of geometric or mathematical figures.  The formulae of the major gods are portrayed by Yantra(s), flat geometric figures, or by Mandala(s), designs in space which are used as guides in the building of sanctuaries.

These basic formulae are to be found at all levels of the creational hierarchy. In the field of sound we can trace them in the combinations of sound relationships in music (raga(s)) or in language (mantra(s)), which, like the Yantra(s), evoke the various aspects of divinity, These relationships are also to be found in the patterns that establish the nature of beings……………

The world is nothing other than voluptuous delight. Its splendor, its beauty, and its diversity make the most wonderful of spectacles. It is as illusory, ephemeral, and unreal as pleasure.

THE temple is a Mandala, a geometric configuration designed according to the archetypes and patterns that are the basis of the structures of the universal and of the human being.

Sacred architecture, based as it is on the symbolism of numbers, the geometric diagrams of the Yantra(s), and its orientation in relation to the constellations of the zodiac and other astrological features, plays an essential part in communication between the various states of being, between men and gods. The real presence of the divine being can be invoked, through the power of the Mantra(s) (magical formulae), within the image at the center of the sanctuary.

The Kali Yuga is the age of the worship of idols. Contact between man and the supranatural is most easily achieved through the architecture of the temple and the images of the gods based on magical diagrams.

Following the destruction of the cities of the Indus by the Aryans, sacred architecture disappeared from India. Only small sanctuaries, a few stones surrounding a Linga, are to be found in the mountains and other isolated places. It was the Buddhists, much later, who again took up the construction of stupa(s).

It was only with the Shaiva renewal that the construction of temples began again, using the traditions whose secrets the artisanal associations had preserved. Pishupata temples were built almost everywhere in India, including Kapisha (Afghani Nuristan), during the time of Harsha (6O6-647); the work had, however, begun in the time of the Gupta(s).  The Chinese pilgrim Hsuan Tsang makes mention of them.

An extraordinary number of temples were built in the areas where the influence of Lakulisha was strongest; from Rajputana to Orissa, and in the south of India. Among them were the temples of Ellora, Elephanta, Bhuvaneshvar, Khajuraho, and, in the south, Badami, Aihole, Chidambaram, Conjeevaram, Madura, etc. They are among the most beautiful monuments in the world, evidence of a period of religious exaltation that calls to mind the later golden age of cathedrals in the West, which was influenced in all likelihood by the Indian architects who fled the Muslim invasions (see Alain Danielou , Le Temple hindou).