On 10 June 1892, aged 27, Jean Sibelius married Aino Järnefelt (1871–1969) at Maxmo. Their home, called Ainola, was completed at Lake Tuusula, Järvenpää in 1903. Sibelius lived most of the time in Ainola, relishing the peace and the countryside round about. 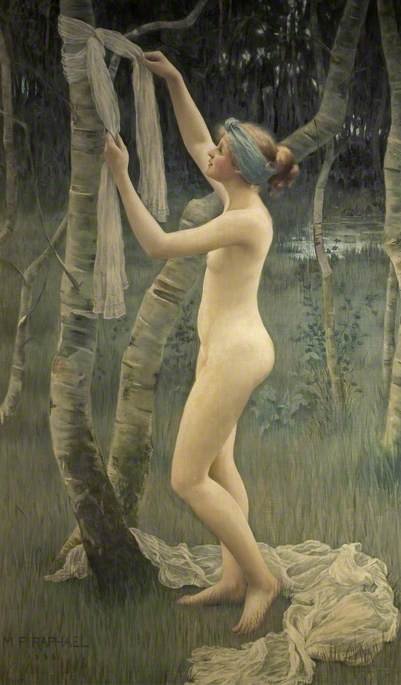 Skogsrået (The Wood Nymph)
Op. 15 Skogsrået (The Wood Nymph), symphonic poem (ballad); based on a poem by Viktor Rydberg of the same name. Completed 1894-95; first public performance in Helsinki, 17th April 1895 (Orchestra of Helsinki Orchestral Society under Jean Sibelius). Arrangement as a play with music (for narrator, piano, two French horns and strings), first public performance in the premises of the Helsinki Club, 9th March 1895; piano arrangement of the final sequence (Ur "Skogsrået") 1895.

An early sketch of Skogsrået or The Wood Nymph may have been included in the plan for an opera in the summer of 1894. In addition to the opera (The Building of the Boat), Sibelius was planning a stage work about an unfaithful student. According to a theory presented by the musicologist Veijo Murtomäki, the "march-like musical piece" which Sibelius mentioned in a letter of 10th August 1894 could be the opening sequence of The Wood Nymph, while the trip to the forest would be the second sequence, the descriptions of unfaithfulness and sensual love the third sequence and the funeral march the finale of the work.

However, towards the end of 1894 the plan became more specific, and Sibelius decided to base the work on Viktor Rydberg's Skogsrået. In March 1895 Sibelius completed "the first sketch" of The Wood Nymph -- a play with music, for narrator, strings, two French horns and piano. It was performed on the occasion of a lottery at the premises of the Helsinki Club, on 9th March 1895.

Viktor Rydberg's text related the adventures of the hero Björn in the forest, where evil dwarfs are carrying out their malicious schemes and a curvaceous wood nymph lures Björn into making love to her. The spell he is under cannot be broken: Björn can no longer love his wife. Nor does he feel like working. He dies alone and full of yearning.

The orchestral version of The Wood Nymph was performed on 17th April 1895. The Wagnerian features of this erotically charged work were now more obvious than before. According to Merikanto The Wood Nymph included strange and enchanting colours, but one had to know the content of the poem to understand it. "And indeed, the audience were very attentive in following the content of the composition from the programme notes," he wrote.

In his opinion Sibelius's music had changed: it had gained in clarity as compared with its earlier "excessively passionate and incoherent fumbling".

The Wood Nymph remained in Sibelius's concert programmes for years. For instance, it was performed in 1899 when the first symphony had its first public performance. Although the piece was basically well worked-out, Sibelius never prepared the manuscript for publication. It gradually sank into oblivion with the exception of a single performance in 1936. Then, in the late 1990s, the work was again thrust into the international spotlight after the Lahti Symphony Orchestra had played and recorded it.

Opinions of the work have varied. Erik Tawaststjerna did not regard the composition as "central" to Sibelius's output, arguing that the composer "did not succeed in merging the different materials into a coherent whole". The composer Kalevi Aho took the same view: "An interesting work which would have needed more polishing."

The Sibelius scholar Veijo Murtomäki has defended The Wood Nymph: "One of the finest moments in the work is the modal-diatonic sound field which starts after the majestic opening and lasts for several minutes, bringing to mind Gorecki's third symphony!"

In The Wood Nymph, the listener can admire the young Sibelius's sensual orchestration and glowing tone colours.