In Hindu mythology, Kansa (Sanskrit:कंस, Kansa), is the tyrant ruler of the Vrishni kingdom with its capital at Mathura. His sister is the mother of the Virgin – the mother of Krishna.  His royal house was called Bhoja and another of his names was Bhojapati 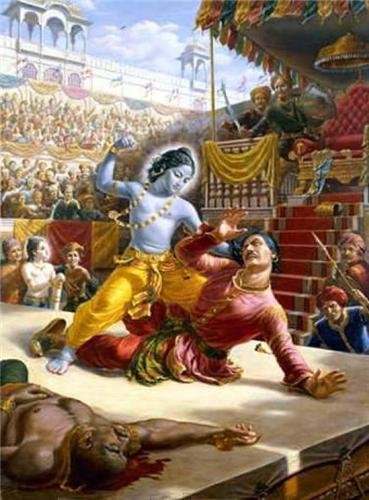 (35) Thus being addressed he, who mischievous and sinful in the past had degraded the Bhoja family, took up a sword against his sister and grabbed her by her hair with the intention to kill her.

(36) In order to pacify him who was ready to commit such a heinous and shameless crime, Vasudeva, that greatly fortunate soul addressed him.

(37) S'rî Vasudeva said: 'A man of so many praiseworthy qualities, such a brilliant star among the heroic Bhojas like you, how can you kill your own sister, a woman, especially at the time of her marriage?

(38) Death is included with the body that was born. Whether one dies today or in a hundred years, ultimately every living being is sure to die

(39) When the body has to return to the five elements the indweller automatically according to his own karma receives a new body upon abandoning the old one.

(40) The way a person as he walks changes from one foot to the other and the way a caterpillar on a plant [moves from one leaf to another], a living being likewise has to experience the consequences of his karma

(41) Just as one in a dream, being endowed with the qualities of a material body, is subjected to that what the mind is thinking and one's consciousness is fully absorbed by that what one hears and sees, one is the same way forgetful in one's present body

(42) The mind, impelled by fate and deliberation moves from one position to the next so that the embodied soul, after the demise of its physical frame, obtains a birth and arrives at a [new] body in accordance with the material quality he was experiencing

(43) The way the reflection of the luminaries, as one may observe them in water or other liquids that are moved by the wind, offers distortions in different shapes, the person, the living entity, likewise in the situation that was created by his own imaginative power in association with the gunas [the world with its changing qualities], gets bewildered depending his attachments [to different bodies or distortions of his form

(44) Therefore everyone to the interest of his own welfare should not harm anybody, for the evil-doer has to live in fear for others himself

(45) This innocent woman, your younger sister, completely depends on you like she was your own daughter - do not kill her. She means good to you and she deserves your care and compassion!'