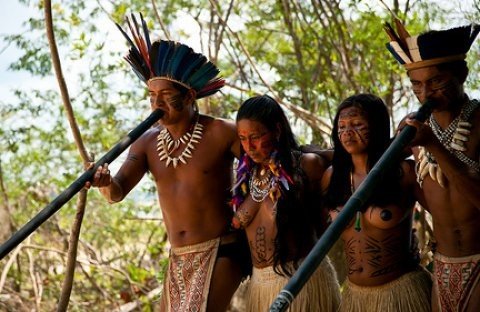 In some gatherings and rituals the men use long, thin stick-rattles.

These lance-shaped objects are adorned at their lower end with yellow feathers and have an oblong, sonorous chamber containing fruit kernels that produce a strong rattling hum when the stick is shaken. This stick is called ye'e-ge (from ye’eri/to cohabit, -ge/male suffix).

The stick is essentially a cosmic axis. When it is stuck vertically in the ground, it is imagined that its lower part, called "yellow," penetrates to Ahpikondia, while the sonorous "blue" part represents the communication with the Milky Way. The central "red" part where the paye or another man grasps it is symbolic of our world.

The small, dry kernels in its resonating chamber are called "embryos" (se'eri).  The rattle-sticks are an important symbol of power of the paye and, theoretically, each sib possesses one of these ritual objects. The sound is "the voice of the sib" or "the voice of the paye" because he is the representative of his group……….

Small rattles are made from the dry seeds of a tree (uaituge from uaiti/bell) and, tied to the ankles, are used by the dancers, especially by prominent "counsellors." The word uaitu is derived from uai/name, and tu'uri is to name, to designate, to point out.