The Crown Fountain at Millennium Park in Chicago, Illinois, which opened in July 2004. The fountain, which is interactive,  is composed of a black granite reflecting pool placed between a pair of glass brick towers. The towers are 50 feet (15 m) tall, and they use light-emitting diodes (LEDs) to display digital videos on the inward faces.  Plensa was commissioned in the early 2000s to create “what is now one of the public’s most loved and well-known sculptures”.

JP: Well actually, you know, when I did the Crown Fountain, it was for me, something extraordinary to have that relationship with the people who we were filming at that time. We did all the video, and then we did incredible post-production, stretching the faces to fit all the mouths in the same place, the eyes in the same place, to try to give the same spread to all the portraits even if they have different origins, different ages and shapes.

When I finished that project I was so moved by the relationship with people that I decided to continue in parallel with my work with text portraits. But, I decided at that moment only to do portraits of a young woman, because I always thought memory and future were female – men are a beautiful accident, but just an accident in-between. Since that moment, that was around 2004, I’ve been taking portraits –maybe I did 14, maybe less. I used [them] a little bit as a canvas where I could dabble in different ideas - elongating, stretching. I did many things with them [and] with mesh heads only. For me it continues to be important that when you finish the portrait you realize you are not doing any specific person, you are making a kind of mural where we can feel reflective. It’s taking this kind of spiritual position, with the eyes closed, as always. In the Crown Fountain, it was the moment when every person we were filming, I asked, ‘Now close your eyes and put your lips in the position, blow to make a kind of gargoyle effect.’ You could tell people were concerned to close their eyes, but it was just beautiful to see them in that position, and I kept in that position, because finally in some ways you are describing a hidden wall that all of us, we keep inside.

Plensa and his team spent around four years working on the project and his team was very large – with people working  on the level of the architectural, LED screens, the water systems, the big plaza, as such it was immensely complex.

JP: Well, I remember, for many people, it was funny to see that the sketches I did at the beginning and the final piece were the same exactly. We spent almost four years working on the project. It’s funny that we had the capacity to keep everyone on my first concept. It’s really amazing. And every time I’m returning to Chicago to see the piece, I’m really happy because people completely embrace the piece, and it’s not anymore mine.

His inspiration was something that is uniquely European - the gargoyle. In Medieval times, churches and fountains would have grotesque faces spitting water from their mouths at the end of say a gutter or a pipe. So Plensa took an old and essentially symbolic notion [spirit beings disgorging spirit output – water] and made it more modern.  He was lucky in having flexible sponsors

Conceptually it was very clear, but it was complex to be done. It’s thanks to the incredible help of the Crown family, because they trusted and believed in the project. We have an understanding. It’s so beautiful in that way, because they said, ‘Jaume, we don’t understand, but you feel so compelled. Okay, so lets do it.’ 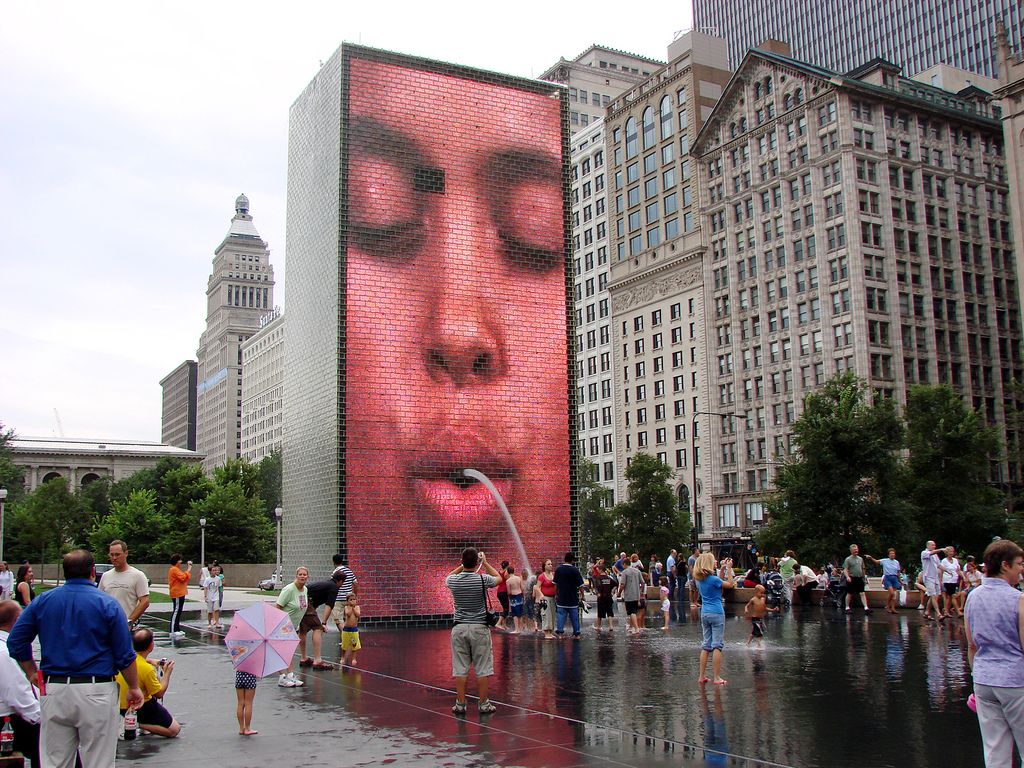