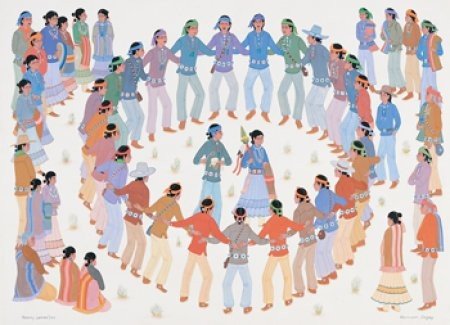 An almost direct copy of what Black Elk said, but I have included it anyway

You have noticed that everything an Indian does is in a circle and that is because the Power of the Word always works in circles, and everything tries to be round.  In the old days when we were a strong and happy people, all our power came to us from the sacred hoop of the nation and so long as the hoop was unbroken the people flourished.

The flowering tree was the living centre of the hoop and the circle of the four quarters nourished it.  The east gave peace and light, the south gave warmth, the west gave rain, and the north with its cold and mighty wind gave strength and endurance.  This knowledge came to us from the outer world with our religion.

Everything the Power of the World does is done in a circle.  The sky is round and I have heard the earth is round like a ball and so are the stars.  The wind, in its greatest power whirls.  Birds make their nests in circles, for theirs is the same religion as ours.  The sun comes forth and goes down again in a circle.  The moon does the same, and both are round.  Even the seasons form a great circle in their changing and always come back again to where they were.  The life of  a man is a circle …, and so it is in everything where power moves.  Our tepees were round like the nests of birds, and these were always set in a circle, the nation’s hoop, a nest of many nests, where the Great Spirit meant for us to hatch our children