Carving is the slowest and the most laborious of the arts. 'By sculpture,' Michelangelo said, 'I understand an art which operates by taking away superfluous material; by painting one that attains its results by laying on.' Michelangelo therefore sought to release his vision from the core of stone but as his wisdom and pessimism increased, the definition of his vision became increasingly uncertain. Inevitably the doubts which develop from this huge uncertainty as to the nature of truth create a condition in which it becomes impossible to know what material is superfluous and from this must follow the suspicion that all material may be superfluous. In this dilemma, I suspect, Michelangelo dwelt at the very end of his life and perhaps it explains the last and strangest of all his sculptures and the four final lines of his poetry (LXXVIII), where he describes a final identification with the material from which he had wrought his life.

Although the forms in his last drawings are palpable and dense, they seem to emerge from a mist of hazarded contours. It is as if he had begun to build back the matrix round the core of his vision. They are drawings which lie in an area of experience only dimly perceptible to the spectator but they still emanate restless power. In contrast the Rondanini Pieta is a statue so stripped, so bare, so passive and so patient that all the spent strength of the titan is drained away and only the spirit remains within a slim and fragile shell of stone.

There are only three who can sit in judgement upon a man so exalted by genius above his fellow men and their institutions.

One is Time - and we know Time’s judgement of Michelangelo. One is God, who does not pronounce judgement until time stops. The third is the man himself and the sonnets describe the terrible harshness of that judgement in Michelangelo's case.

On the 12th of February 1564 he worked, standing all day, at this last Pieta, drastically recutting the stone so that it remains now in a state of transition between two quite different conceptions of the same subject. A disembodied arm remains to testify to the first vision, as does the first version of the Virgin's face, upturned and left like a ghost upon the headdress of her bowed head. The Dead Christ, slim and worn as a sea-washed bone, is as remote from the all-conquering athlete of The Last Judgement as sleep is from earthquake. The thrust is gone, the weight is gone, the articulation no longer describes energy.

ln the Rondanini Pieta is the still centre. The trembling mountains, the turbid seas and the fallen angels of which he speaks in sonnet LXXVI may seem to surround the spectator; they do not touch the sculpture. It is unfinished and it is finished.

Six days later, on February 18th, it was all finished. Michelangelo was dead. He was eighty-nine years old. 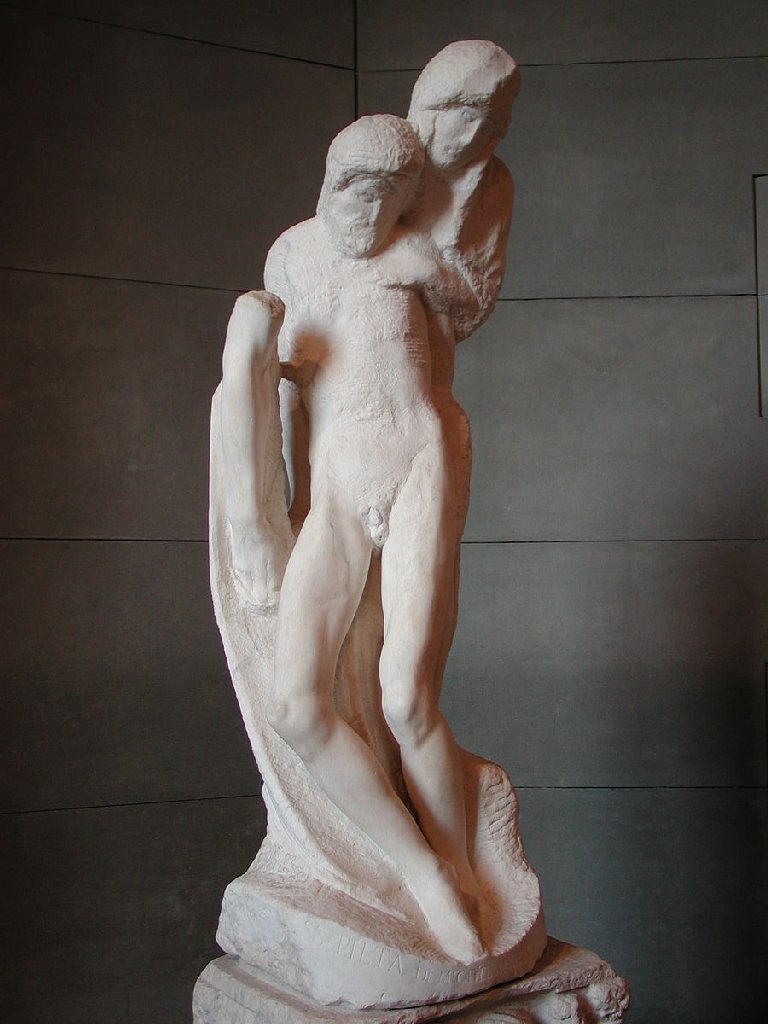 Dear to me is sleep; still more, being made of stone
While pain and guilt still linger here below,
Blindness and numbness - these please me alone;
Then do not wake me; keep your voices low.