Mesopotamia - Its technology and culture 03 Healing 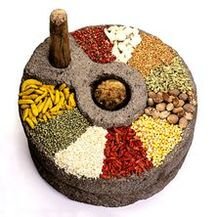 Healing relied on two types of people in Mesopotamia – herbalists who based all their healing on plants or food, who were called ‘asu’; and ashipu, “whose cures were magical and no doubt psychologically highly efficacious”.  Both men and women could be healers.

This type of medicine was being practised as long ago as 3000 BC.  The oldest medical text known, an Ur III pharmacopoeia, written in Sumerian, contains prescriptions using cassia, myrtle, asafoetida, thyme, willow, pear, fir, fig and date.  Interestingly, the potions were often dissolved or preserved in beer – a method used much later in other cultures, as beer is often safer to drink than water in countries without water purification systems. 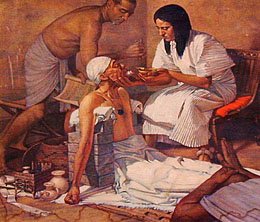 A lengthy tablet of the Neo-Assyrian period, signed by the physician Nabu-le’u, provides further, though regrettably rare evidence for medical treatment using plants.  The text is divided into three columns, giving the names of the plants, the diseases for which they should be prescribed and the method of administration.  The first column enumerates a material medica of more than 150 items, specifying what part of the plant to use and indicating any necessary precautions.  The third column gives the frequency of dose, time of day and notably whether the patient must fast before hand.

An Assyrian compendium on medicinal plants, preserved in the Ninevah and Assur libraries contains more than 400 sumerian names for plants fruit etc which can be used to heal.  Of the 100 or so commonly used and 150 less frequently used plants, a substantial number are now known to have definite medicinal properties.  And it is our ignorance of the plants properties that is being exposed here – the Babylonians already knew, we are only now playing catch up.

The Sumerians and Babylonians attributed numerous diseases to the presence of ‘demons’ – which we are only now beginning to recognise are the cause of illness – viruses, bacteria, fungi, parasites and toxins – although the number of toxins we are now having to deal with far exceeds those the peoples of this era had to deal with. 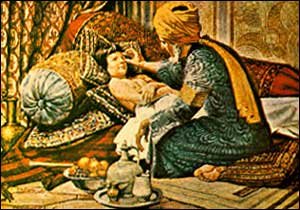 There is also recognition of other types of demons – the psychological demon and there is evidence that the Babylonians used dream analysis.  They did not use it to prophesy, but they did analyse dreams to try to work out symbolically what it meant for that person.  There were ‘expert’ dream interpreters specialised in this.  In effect, 5000 years ago, the Mesopotamians were using Jungian psychology to help expunge demons, which they simply viewed as another cause of illness.

There are also tablets which use the system used by doctors today to classify disease.  For example

“If a man’s body is yellow, and his eyes are yellow and the flesh is flabby, it is the yellow disease [jaundice]”.

“if a man is stricken with a stroke of the face and his whole torso feels paralysed, it is the work of the stroke; he will die”

The number of illnesses and disease capable of being recognised was extensive – diseases of the eye, respiratory ailments, hepatic disease, gastric conditions and problems with the heart.  Conditions such as enteritis, colic, diarrhoea, intestinal obstructions and even dysentery are mentioned.  There are tablets mentioning ailments of the genital organs, diseases of the legs and even gout.  They knew and could recognise contagious disease.  They could test for temperature, pulse, skin inflammation, and used urine colour. 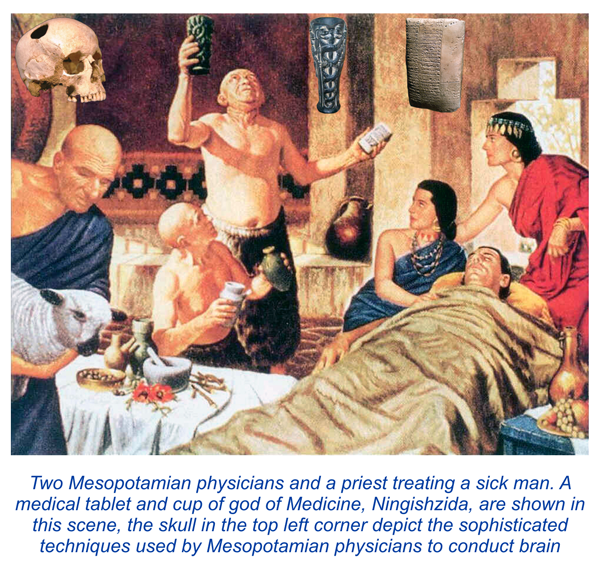 The Code of Hammurapi tells us that surgical operations were performed, setting broken bones included.  There may even have been basic cataract treatment.

The ashipu appears to have been responsible for basic diagnosis using information like this, whilst the asu was called in to decide the treatment.  The asu was a practitioner of some status and there appear to have been far more ashipu than asu.  They worked together too:

“If the work of the hand of a ghost [often thought to be the cause of conditions of the ears and eyes] is so tormenting that the ashipu is unable to eradicate it, you, the asu, may mix together eight plants/herbs”.

One of the most intriguing aspects of healing in the Mesopotamian system is that it was holistic – it treated the whole body and the mind as one and people with different skills worked together to find out the cause and decide treatment.

Ludlul bel Nemequi
My affliction increases, right I cannot find
I implored my god [Higher spirit], but he did not turn his countenance;
I prayed to my goddess but she did not raise her head
The diviner [pathologist] through divination did not discern the cause
The dream interpreter [psychologist] did not explain my right
The magician [psychotherapist via suggestion] through magic did not dispel wrath against me
Whence comes the evil thing [pathogen]?
My symptoms have troubled the [diagnostician]
And my cause/effect ‘omens’ have confounded the [pathologist]
The herbalist has not diagnosed the nature of the complaint
Nor has the [pathologist] put a time limit on my illness

Perhaps one of the most tragic aspects about Mesopotamian medicine is that this holistic approach is not being used today and, insofar as the texts are in any way revealing of the nature and extent of Babylonian medical practise , they show an extensive and sophisticated understanding of plants which far surpasses any we have today.  Furthermore from the evidence, they include a number of plants of known medicinal value.

One last interesting little snippet:
“Mutilation and even death were the penalties for medical errors, though we have no evidence that this was ever enforced”