Milestones in Yehudi Menuhin’s Career, As Told by the Man Himself

Most musicians are defined and remembered in terms of sound. This is, of course, natural. A great musician is undeniable—instantly recognizable—as music pours from his instrument into the ears and souls of his listeners. Hushed, excited voices recall the name, but it is the sound that leaves one captivated. No one else sounds like that. No one. And no one will again. Yehudi Menuhin was one such musician, but to reduce his life to a characteristic sound is to diminish the legacy of a man who was at once worldly and otherworldly.

His talent made him a star, however his music was more than an expression of art: It was his approach to germinating change in a world seemingly bent on self-destruction. But there’s no need for a biographer here: Menuhin told his own story and was a prolific published author. From technique to yoga to history, Menuhin’s writings reveal the breadth of the violinist’s natural curiosity. The following timeline describes major milestones in Menuhin’s life—in his own words.

“My mother was 20, my father 23 when they began, with my arrival, to subordinate their own interests to their children’s, a regime which would end only in 1938 with the marriages of my sisters and myself.”

Menuhin asks for his first violin

“At the age of four, I was too young to know that the violin would exact a price commensurate with the grace it conferred—the grace of flying, of occupying an absolute vantage point, of enjoying such dominion over nerve, bone, and muscle as could render the body an ecstatic absentee. But I did know instinctively, that to play was to be.”

“ . . . After I had played for him, he took me as a pupil, refusing any remuneration. From that moment Enescu was a major influence in my life and I was no longer alone. All musicians who knew him, who played with him, will tell you the same: Enescu was one of the greatest inspirations of their lives, musically or otherwise.” 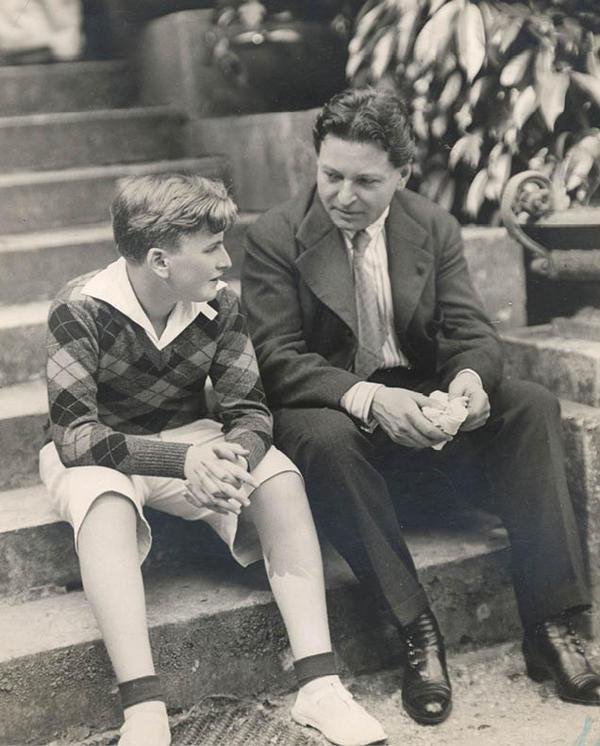 “I don’t remember much of either concert, except that they were successful beyond our wildest dreams, vindicating so much that had gone before, promising so much for the future. At the first, on November 27, 1927, feeling too small an object for all the noise that broke from the audience, I tried to deflect attention to Busch, to the orchestra, to Persinger, whom I dragged onstage and pointed to, but I had to appear in overcoat, cap in hand, before they would let me go.”

“To my relief [the recording] went like a dream, and both of us were very happy. I had never played with such a large orchestra and had never seen a composer/conductor bring so much out of the orchestra with so little gesture or apparent effort. The concerto had been . . . originally dedicated to Fritz Kreisler, but on the score Elgar gave me he had written in his own pen ‘and also to Yehudi Menuhin.’ That was a treasured tribute I shall always remember.”

Menuhin premieres the Bartok Sonata for Solo Violin, which he commissioned

“His is music which goes beyond the human, which reaches into heaven and hell. Perhaps this is because his music is so deeply rooted in the folk songs and culture of his land and carries the indomitable heritage of aeons of time. It is not merely the expression of one man but the expression of generations.”

After playing throughout World War II for the Allied Forces and International Red Cross, Menuhin travels to Germany with Benjamin Britten to play shortly after the war ended

“We took with us more or less the whole standard violin literature . . . and played it, without rehearsal, two or three times a day for ten days in the saddest ruins of the Third Reich. At Belsen we played twice in the afternoon. I shall not forget that afternoon as long as I live . . . No doubt the few weeks since their rescue had put a little flesh on their bones, but to our unaccustomed eyes they seemed desperately haggard, and many were still in hospital.”

“I was thumbing through a pamphlet in a waiting room. It was a brief introduction to hatha yoga, that is, to the bodily positions, or asanas, and it was truly a revelation to me: I realized that here I would find the key to certain enigmas in life, as well as a means of understanding better and mastering the technique of the violin. This was the beginning of an experience that was to leave its mark on my whole life.”

“It is [at my school] that in the last few years the reciprocal experience and privilege of learning and teaching has become a way of life to me.”

“Ravi Shankar revealed to me a new dimension in music. It was thanks to him that I came to understand the religious quality
of this art, and the devotion and inspiration which it demanded . . . . The first time I heard Ravi Shankar play this music, which has neither beginning nor end, but which is fluid and moves like a river, I was astonished. For me, he is one of the world’s greatest musicians.”

“At the moment when he played, Stéphane Grappelli must have experienced the exhilaration of being a free man who owes nothing to anybody and who depends only on the inspiration of the moment. His capacity for improvisation was such that he was incapable of playing anything twice in the same way.”

[His words, on the death of Bartok]

“That seems to be the way great creative men die—as they fall to earth they cause even less disturbance and produce a smaller ripple than a ripe golden autumn leaf floating down onto the surface of a tranquil lake. And as the leaf, they too have given their best to the tree, and only the fantastically hued husk remains to melt away.”