Dr Grof experimented on both himself and a number of volunteers to try to unearth lost and buried Perceptions. 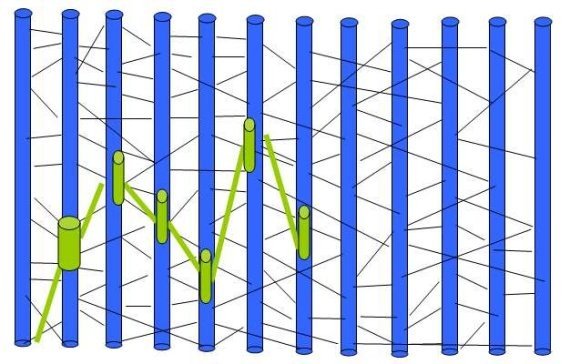 In the diagram, we can see that different links are being followed to get to cultural sections of perceptions.  The person this time has, probably unconsciously, provided a keyword, or alternatively the composer has deemed it of importance to provide an extract from some culture – a window onto other cultures.  There is an implication in Professor Grof’s description that at least some of these extracts from perception are genuinely  ‘historical’.  In other words they are the perceptions of a person long since dead, made at the time the act being witnessed was done.

The link to the perceptions may be again the activity for example, embalming or running, death or religious ceremonial.

Collective and racial experiences can be related to any country, historical period and cultural tradition, although there seems to be a certain preference for ancient cultures and countries with highly developed religious philosophical and artistic traditions.  Sequences related to Egypt, India, Tibet, China, Japan, Pre-Columbian Mexico and Peru and ancient Greece tend to occur with surprising frequency.  The choice of the cultures and their specific aspects seems to be quite independent of the subject’s ethnic background, country of origin, cultural tradition and even previous training, education and interests.  An Anglo Saxon can, therefore, experience full identification with various periods in the history of African Americans or North American Indians and develop, as a result, a new sensitivity to and awareness of racial problems……………

The information communicated by these experiences is usually quite accurate and can be verified by consultation of archaeological and anthropological sources.  It frequently encompasses specific esoteric details; in many instances, the degree of historical or ethnographical knowledge that emerges is clearly incongruent with the subject’s previous education and level of information in these areas.

On occasion, unsophisticated individuals have described details of Egyptian funeral services, including the form and meaning of various amulets and sepulchral boxes, the colours of funeral cones, the technology of embalmment and mummification and the sequence of ritual procedures followed.  One subject who experienced himself in one of his LSD sessions as an embalmer in ancient Egypt was able to describe the size and quality of the mummy’s bandages, materials used in fixing the mummy cloth, and the shape and symbolism of the four canopic jars and the corresponding canopic chests.

Other individuals gained an intuitive understanding of the functions of various Egyptian deities, the symbolism related to them and the esoteric significance of the pyramids and the Sphinx.  In one instance, a subject who had experienced sequences from the life of old Parsees was able to describe not only the nature of their religion and their funeral practices but also specific technological details of the Zoroastrian dakhmas (towers of silence) in which the dead were devoured by vultures …..