An often described but rarely seen adverse effect of digoxin poisoning is a disturbance of colour vision (mostly yellow and green colour) called xanthopsia. It has been proposed that the painter Vincent van Gogh's "Yellow Period" may have somehow been influenced by digitalis therapy - as such, to the long list of things that contributed to his inspiration we can add being mis-prescribed pharmaceuticals.

Other oculotoxic effects of digoxin include generalized blurry vision as well as seeing a "halo" around each point of light. The latter effect can also be seen in van Gogh's Starry Night. Evidence of van Gogh's digoxin use is supported  - according to researchers - by multiple self portraits that include the foxglove plant, from which digoxin is obtained. (E.g. Portrait of Dr. Gachet).

I'm afraid I don't agree with this rather simplistic piece of logic.  Just because a painter puts a flower in a picture does not mean he is eating it, however, what may be more interesting is that both cause brain damage, as such it may well indicate that brain damage was quite severe at this stage. 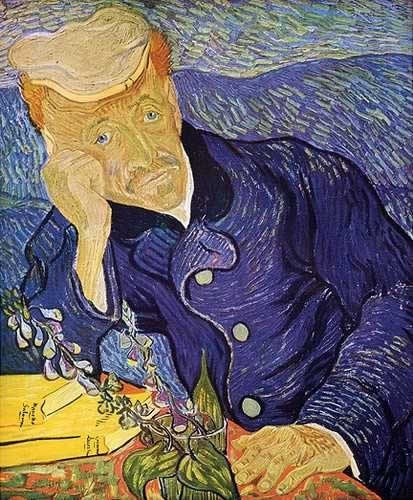 Being mis-prescribed pharmaceuticals
Drinking absinthe
Going out in violent weather