Republicans loyal to the left-wing Second Spanish Republic, in alliance with anarchists, fought against  the Nationalists, [an alliance of Falangists, monarchists, conservatives and Catholics], led by a military group among whom General Francisco Franco soon achieved a preponderant role.

The war began after a pronunciamiento (a declaration of military opposition) against the Republican government by a group of generals of the Spanish Republican Armed Forces, originally under the leadership of José Sanjurjo. The government at the time was Republican, supported by communist and socialist parties.

The coup was supported by military units in the Spanish protectorate in Morocco, Pamplona, Burgos, Zaragoza, Valladolid, Cádiz, Córdoba, and Seville. However, rebelling units in some important cities—such as Madrid, Barcelona, Valencia, Bilbao, and Málaga—did not gain control, and those cities remained under the control of the government. Spain was thus left militarily and politically divided. The Nationalists and the Republican government fought for control of the country.

The Nationalists eventually won the war, which ended in early 1939, and ruled Spain until Franco's death in November 1975, but not before many casualties had occurred on both sides. 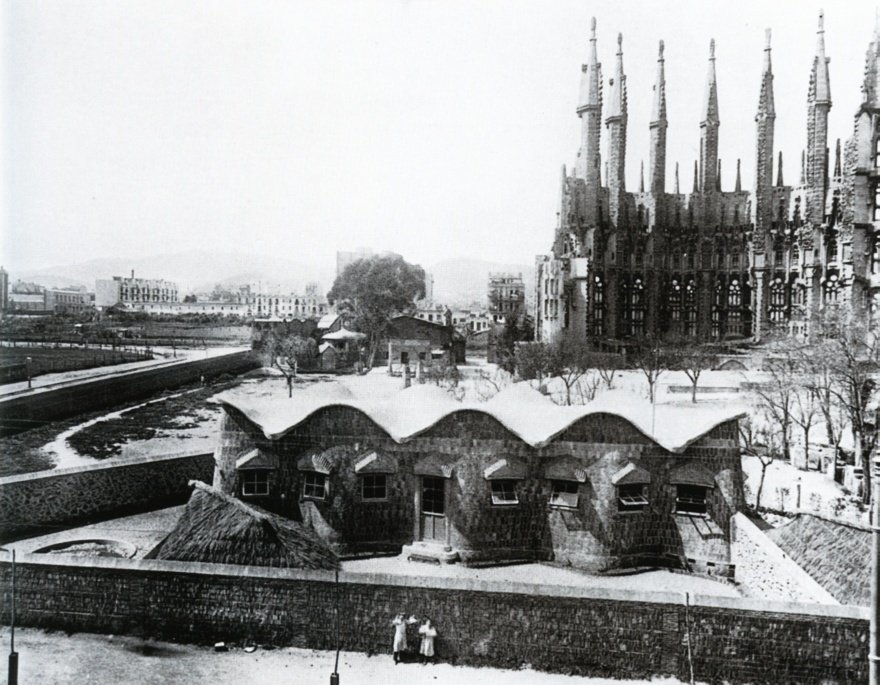 During the last years of his career, Gaudi dedicated himself almost exclusively to the Sagrada Família.  In this monumental work, Gaudí reached the culmination of his naturalistic style, creating a synthesis of all of the solutions and styles he had tried until then.

But the fame of the cathedral often overshadows another example of this mature naturalistic style.  In the simple but very ingenious building, the Sagrada Família schools, we can witness his constructive genius on a smaller scale.  These buildings have served as a source of inspiration for many architects, such is their ‘simplicity, strength, originality, functionality and geometric excellence’.  We can see in the photo, that the original location of the school was not where it is now, nor is it now complete.  The original building was destroyed in 1936 during the civil war and the reconstruction near the cathedral is not entirely faithful to the original. 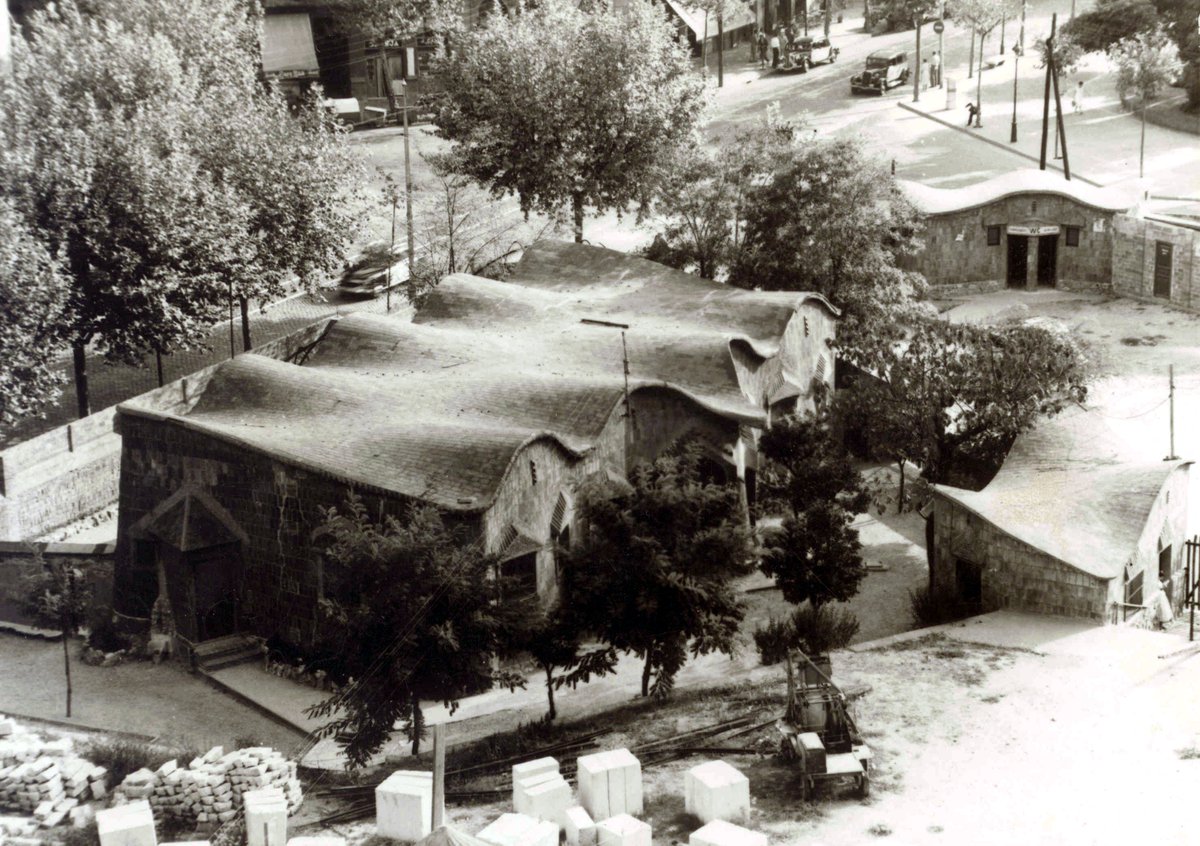 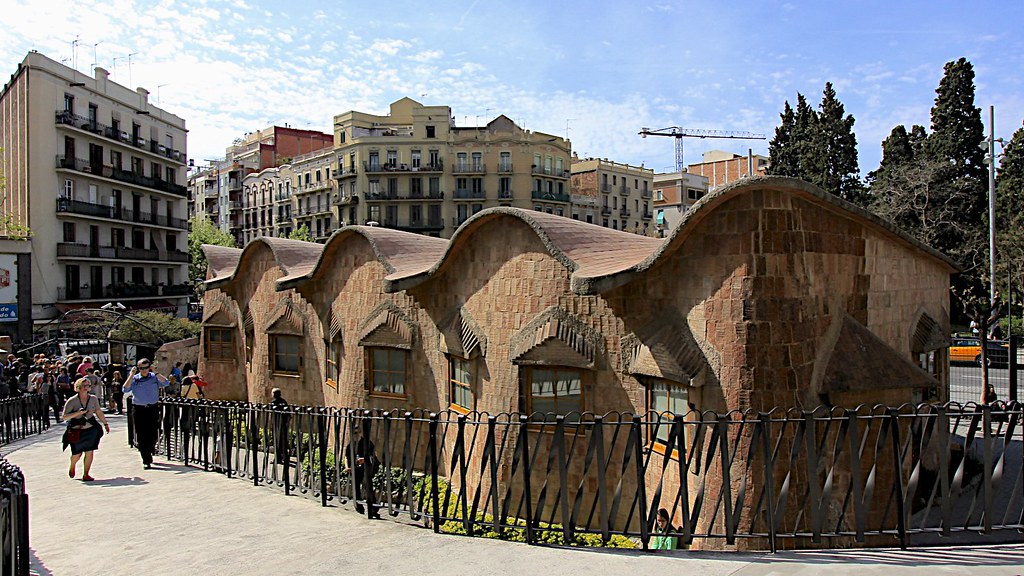 Father Gil Parés i Vilasau (1880-1936) was quite forward thinking when compared to the standards of that time. Very soon after his ordination, he was named priest of the Sagrada Família by Cardinal Casañas and he remained in this job for more than thirty years.  Father Gil was entrusted by the builders of the Sagrada Família to find someone to design and build a school for the workers’ children.  In turn, Father Gil asked Gaudí to design a simple school at the lowest possible price.

Gaudí prepared a design in 1908, following the instructions of the Father and, just as he had been asked, Gaudí did an extremely simple, but at the same time human and friendly design – and kept within budget.  In fact, to any child it must have seemed more like a playhouse than a school.

Built in 1909, the building had a rectangular ground plan of 10 by 20 metres (33 ft × 66 ft), and contained three classrooms, a vestibule and a chapel. Everything was at ground floor level, meaning any child would look on it as a friendly building of their scale. 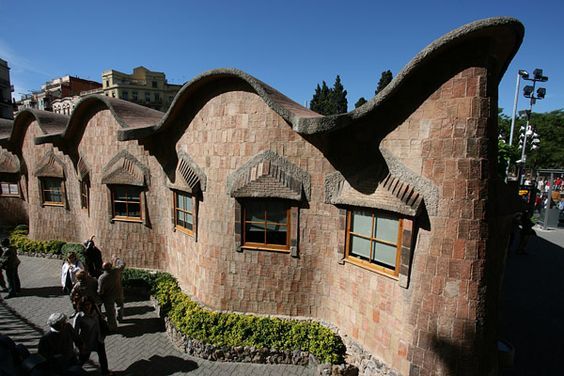 It was built of Catalonian exposed brick, in three overlapping layers, following the traditional Catalan method. The walls and roof had and still have an undulating shape, giving the structure a sense of fun and informality.  A sort of gingerbread house for learning.  Even the windows make it look more like a playhouse.

The design of the roof, however, was very de;oberate and was done this way for a purpose:

Some of Gaudi's most interesting structural techniques were successful in speeding construction and consuming fewer raw materials. The roof he designed for the school on the grounds of the Sagrada Familia is shaped similar to a Magnolia leaf, in the form of a conoid. This naturally-occurring wave shape channels rainwater off the roof and was able to be made thinner, requiring less material, due to its innate strength.

The base was of masonry and the floor had a stone base, to minimise humidity.  The doors and the tipping windows [more fun but better ventilation too] were of wood.

The toilets were situated to both sides of the building, with direct access from the playground, meaning any child at play had immediate access to a toilet and the toilets would have been easier to clean – swilled out with water.  The dimensions of the building itself are 24 m. long, 12 m wide and 6 m height.  The roof was also of three layers of Catalonian brick, and had conical vaults of extreme rigidity, that are supported by the walls and a laminated steel central beam of 220 mm.

In the interior, two walls separated the three classrooms and there were three metallic pillars to support a double T beam to support the roof.  The works were finished in autumn of 1909 and the classes were begun almost immediately. 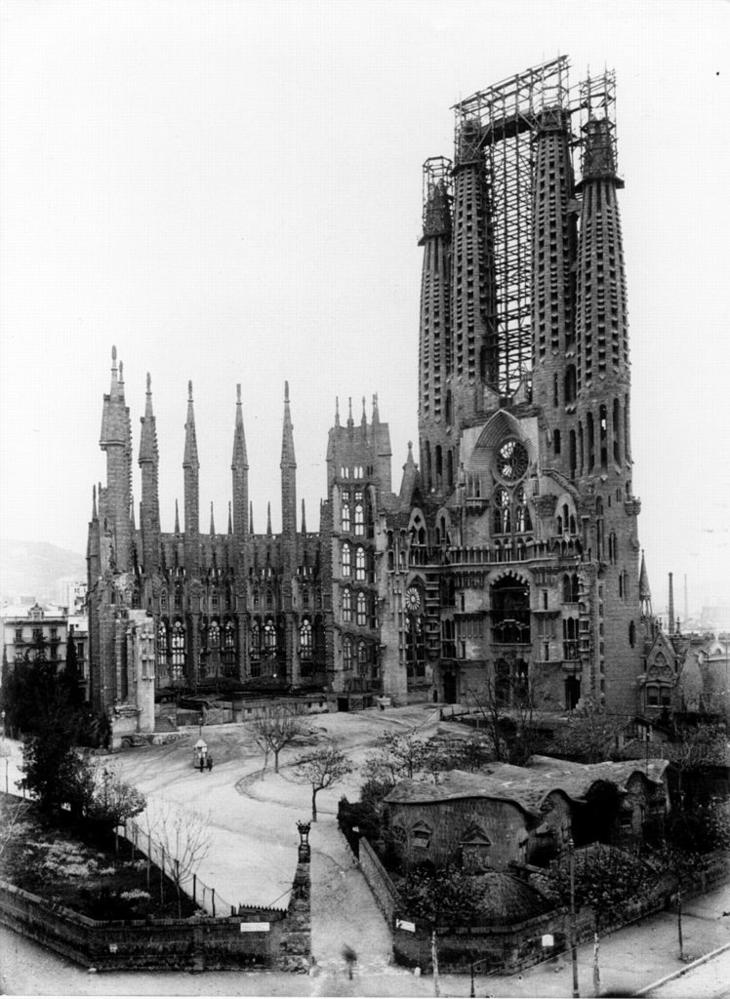 The children were very lucky, as Father Gil Parés i Vilasau (1880-1936) was not just forward thinking in his choice of architect, but he decided to adopt the methods of Maria Montessori, a lady we have on the site. And it gets even better, because the good Father also decided that the teaching should be – as far as practically possible - outdoors, because ‘this permitted the children to be more in contact with nature.’  On the exterior three areas intended as open-air classrooms were covered with iron pergolas.  The photos appear to show that the school was, at one time, surrounded by plants.

The final icing on the cake was that the school was originally located on ground destined to face the Glory facade, in a site which would not, it was believed, be needed for the Sagrada Família. As a school child it must have been stunning.  A comforting place of learning and play, facing heaven.

The quality of the teaching and the benefits it brought the children have subsequently been recognised by many later educationalists, as well as the children themselves.  Some written testimonies bearing witness to the high standards reached, can still be found in an article called “Ilustración Catalana” (Catalonian Illustration) written about them in 1914.

All good things come to an end

The building was used as a school until 1936.  But on July 20th, after the military coup d’etat in Barcelona was defeated, the revolutionary groups burned and destroyed the school. The fire affected the beams of wood supporting the roof and it collapsed. The furniture and the contents of the school were destroyed. 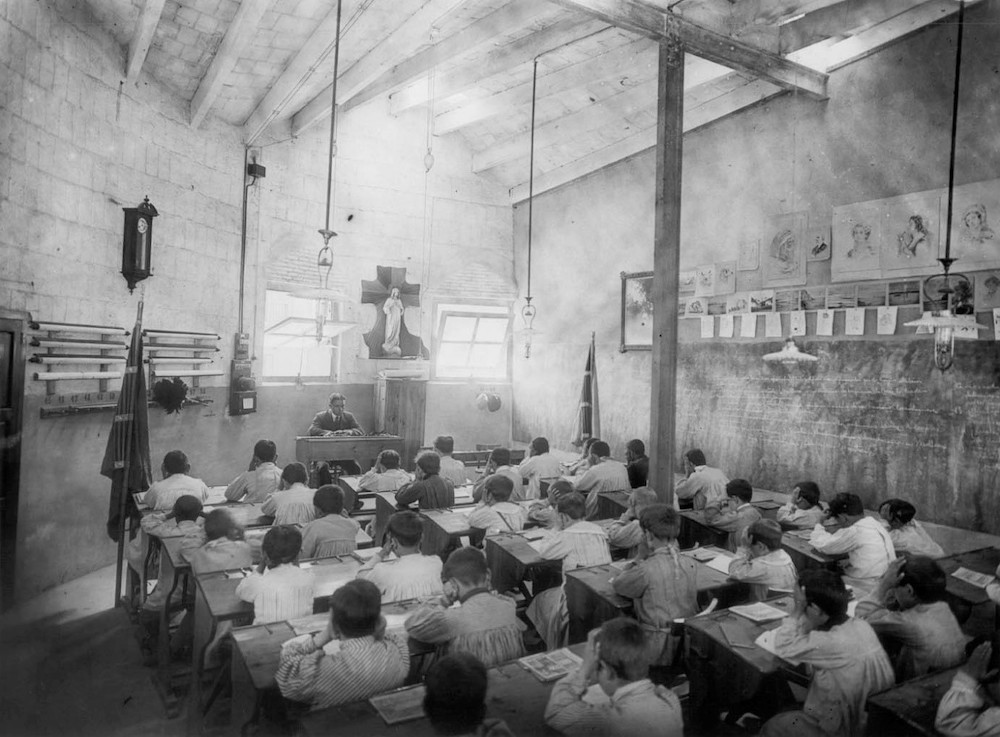 Father Gil Parés , like many other religious and pious souls , died during the revolutionary destruction – probably heartbroken – as he died in the initial days of the civil war (1936-1939) aged only 56.

The CENU (Committee for the New Unified School) was given the job of building a new school for all the children now without one.  Although the school was used by the children of the workers building the Sagrada Família, other children of the neighborhood had attended, especially from the underprivileged classes. So the destruction had hurt those the revolutionaries claimed to be representing.

The Committee entrusted architect Francesc de Paula Quintana with the reconstruction of the building.  Thankfully, the architect recognized the value in this work of Gaudí’s and decided to maintain its character and characteristics.  Unfortunately, he clearly did not understand the intention behind Gaudi’s design and in the end vital parts were changed, being considered then as ‘improvements’, possible as a consequence of new technology. 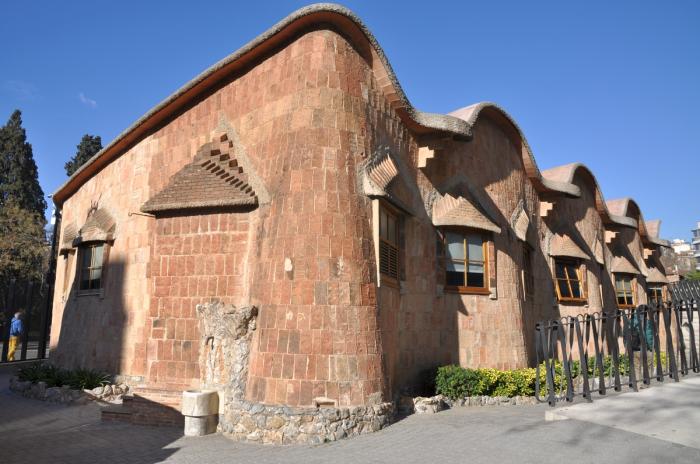 So, the majority of the original innovations of the building disappeared, even though some effort was made to respect Gaudí’s work. They added a false cork ceiling as insulating element, without understanding anything of the insulating qualities and interesting effects of the brick used, nor the interest the children were given in being taught under a wavy roof of brick and wood; they plastered the walls and changed the windows to become double windows – thus changing all the nuances of light and shade, the echoes and the fun of the original.

The classes restarted during the spring of 1937.  But without Father Gil, the school was not the same.

And then more disasters befell the school.  In January 1939, all the teaching material - books, charts, maps, etc. that were in Catalonian were burned by the revolutionaries.  The classes restarted in the spring, but every trace of the children’s mother tongue – the Catalan – had been totally eradicated.  The school never recovered. 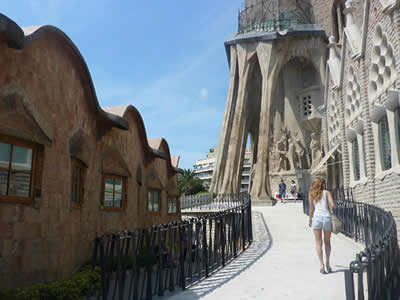 Some time later, the “Institut Gaudí de la construcció” (Building Gaudí Institute), proposed the construction of a replica on its lands in Badalona (a town close to Barcelona). This resulted in a more thorough investigation into Gaudí’s original design, and a better understanding of the techniques he had used and wanted.  When the building was moved to enable the building work on the cathedral to proceed with more ease, an attempt was made to apply this better understanding in the reconstruction of the building

But the reconstructed building is no longer used as a school.  It houses the Museum of the Sagrada Família and various models used in the construction of the cathedral.  A very very sad end to what was once a lovely idea.