How many times have we read that an 'animal did this', or 'a plant did that', when we know full well that the functions are not in the control of the animal or plant.  In all cases, it is clear the function is allocated to the creature or plant and activated by means other than the creature's will.  In effect, the creature itself has not created the function, the function has been created for it so that it is able to respond to whatever triggers it may experience.

This has considerable impact on the belief that somehow 'evolution', in the sense of genetic mutation to handle such things as environment change, is the cause of everything.  But no-one has yet been able to explain how a function as complex say, as eye colour change or coat change or thermo-regulation can be programmed in without as it were a programmer or – in the beliefs of most biologists – a program!

So here is an example.

So..... how does the wolf [clever little creature that it is] change its temperature or its coat?  Consciously it doesn't, which means its autonomic system is handling it.  So we have to admit system – extremely complex system - and triggers, seasonal changes and temperature changes.

If I were a systems analyst looking at this system I would draw the following dependencies between systems...

The temperature is controlled via air/gas systems, the seasons by the planetary orbit system [around the sun], its angle of tilt being constant [at the moment].  The wolf system would also need to know the position of the wolf to ascertain what season it was.  A wolf at the equator would experience no seasons.  So angle of tilt, position on earth and position of orbit would give precise enough information to any wolf systems to operate the coat change function. 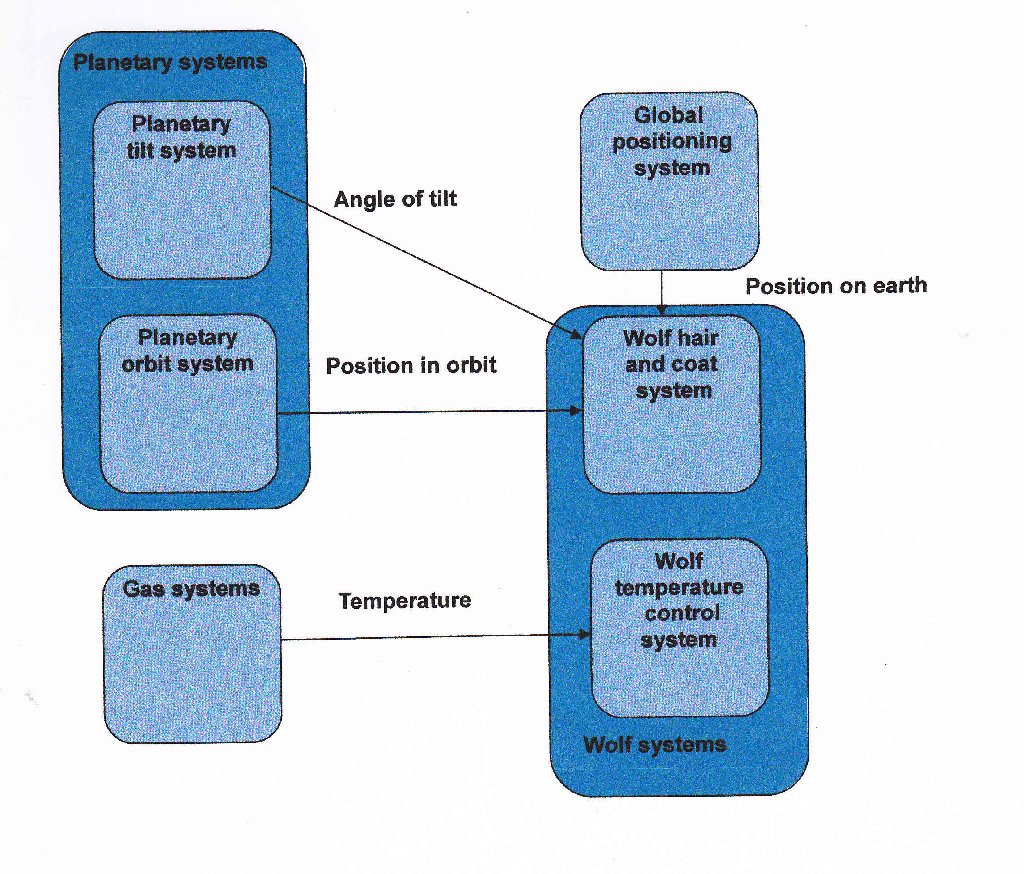 It gets very cold in winter in Eastern Canada and geese and many other animals anticipate the  weather and migrate.  But wolves (Canis lupus) stay put, thanks to some remarkable adaptations that help them cope with a temperature range of approximately 50 degrees C or more, from -30 degrees C in the depths of winter to perhaps 20 degrees C and higher in summer.

The wolf's coat ranges from white in cold weather, to red or black in hot weather and greyish in normal weather.  In the summer it sheds much of its fur so it will not get too hot and can run without getting overheated.  In winter, when a wolf stands in snow at a temperature of -30 degrees C, it has to prevent its feet from being frostbitten while also not losing heat from its body through its paws.

It does this by lowering its paw temperature to close to 0 degrees C which is sufficient to stop frostbite, but maintains its core body temperature at 38 degrees C.  Because it can keep different parts of its body at different temperatures, Nicholas Mrosovsky, a Canadian biologist, has pointed out that this differential temperature regulation 'prevents the tissues on the extremities from freezing yet minimises the drain of heat.  Local thermoregulation is supported by appropriate vascular specialisation to ensure that warm blood reaches the places it is most needed (Mrosovsky 1990)