Although the pressing of the perineum tends to be associated with yoga practises and Buddhist practises, it would seem that the pose and its effects were well known in many other spiritual seekers world-wide.

In the photo below we see ‘Cernunnos’ - the name given in Celtic studies to depictions of a horned ‘god’ in Celtic beliefs. The ‘god’ is probably a druid or shamanic figure, as depictions of a horned or antlered figure, often seated cross-legged and often associated with animals and holding or wearing torcs, is quite common.  Wikipedia says “Speculative interpretations identify him as a god of nature or fertility”, which is lovely, and typically academic.

In the photo we can see the snake and the perineum pressing.

The photo is of the  Gundestrup cauldron - a richly decorated silver vessel, thought to date between 200 BC and 300 AD.   It was found in 1891 in a peat bog near the hamlet of Gundestrup in the Aars parish of Himmerland, Denmark.   It is now housed at the National Museum of Denmark in Copenhagen. 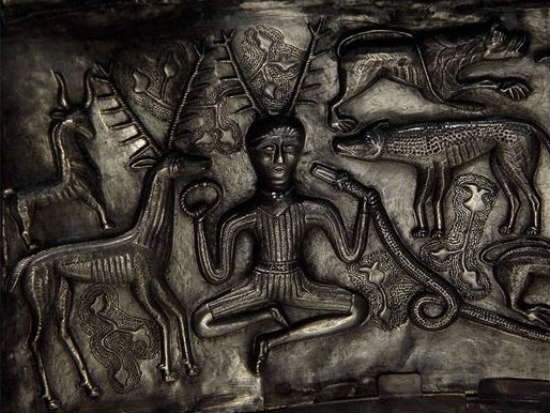