According to Wikipedia “Humorism, or humoralism, is a now discredited theory of the makeup and workings of the human body, adopted by Ancient Greek and Roman physicians and philosophers, positing that an excess or deficiency of any of four distinct bodily fluids in a person directly influences their temperament and health”.

Except that this is wrong.

The theory of the four humours is based on the levels and layers – the vibrational levels and layers of Air, Water, Earth and Fire. The colours used are the alchemical colours and the words 'bile', 'phlegm', and 'blood' are symbols not literal.

The human body that we can see is made up of the physically apparent Earth layer functions as well as the Platonic solids, but it is also made up of other functions, which reside at various levels and layers. The names given to the various levels were symbolic and alchemical [see the correspondences]. 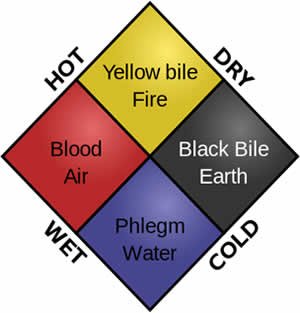 Furthermore, further imbalance can result in their being functional overload. If we look at the section on intensity we should be able to see that functions have a sort of scale of intensity and when the intensity increases that too can lead to imbalance. So the system is eminently sensible and is the foundation of Ayurverdic and Chinese medicine both of which tend to refer to people as too 'hot' [too much thinking and not enough relaxation] or too cold [not enough thinking too much relaxation!].

At one time, and from Hippocrates onward, the use of the levels and layers together with functionally based medicine – emphasis on the software of the body as the ultimate cause of illness - was the prevalent method of curing the sick; Greek, Roman and Persian physicians, Chinese and Hindu physicians all used it and for a while it was also the approach used by European physicians.

Then along came “modern medical research in the nineteenth century” and we veered off into a hardware based view of the body – fix the machine and the software will take care of itself, which as all so called 'alternative medicine' practitioners know is patently daft.