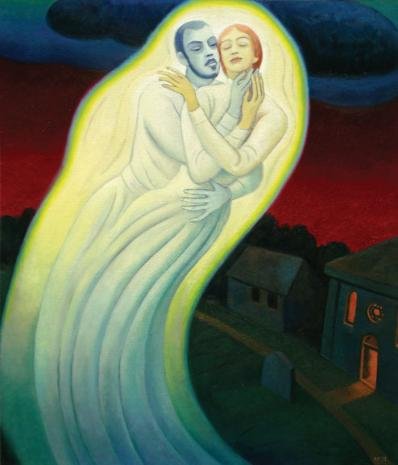 A dybbuk in Jewish folklore is the restless soul/spirit of a dead person that endeavours to enter the body of a living person.

It takes over his/her body, talks through his/her mouth, and controls his/her behaviour.

In other words a dybbuk is a disembodied soul that possesses a living soul.

The Dybbuk [also entitled Between Two Worlds] is a Yiddish play by Solomon Rappoport (better known as S. Ansky) which is based on this theme.  Ansky's play, one the most famous Yiddish plays of all time, was a great success right from its first performance shortly after Ansky's death in 1920, and this success continued in performances in many countries over many years. 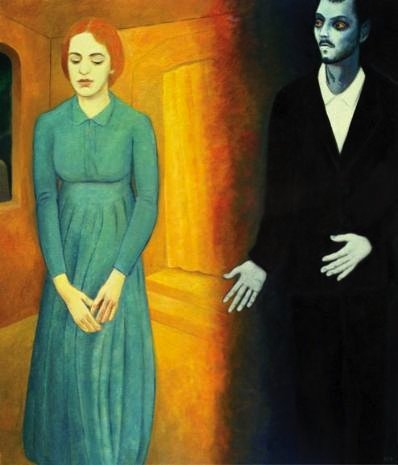 The play is about the love of two young people, Chonon and Leah, who were betrothed to each other by their fathers when they were small.

But Chonon is a poor Talmudic student, and Leah's father breaks the agreement and plans her marriage to a rich young man. Chonon invokes the mystical powers of the kabbalah before he dies, and, as Leah is getting married, his spirit enters her body and she, being possessed by this dybbuk, speaks his words and in his voice.

He cries out that he has come to possess her and claim her as his own. Leah's father asks the rabbi to exorcise this evil spirit from her body, which he succeeds in doing, but eventually Chonon has the last word as he takes Leah's soul away from her body to be united with him in death.

Ira Gershwin is said to have been very fond of this play and his brother George even considered an opera based on the play.