It may be helpful here to refer to the Model of the Mind whilst you are reading this definition.

The Direction system determines the next activity – sweat, flee, run, laugh, - action in other words.   All activity, ALL activity is determined by the Direction system, including Learning, Creativity, Remembering and recall.  Only the Composer remains autonomous – an alternative will within our minds.  The direction system has two sub-functions:

It is the classic control system, because although an overall Objective may be directing the course of activity, there will be constant alternative actions  - changes in course and adjustments to activity - being made to account for Threats or for that matter to take advantage of Opportunities – all of which we know about because they are input as Perceptions. 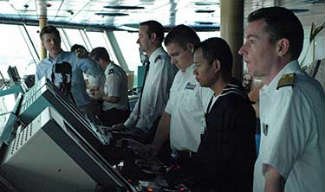 We can think of the Direction system like the bridge of a ship - like a form of command and control system.  It receives input and in turn it directs operations.  Thus it gets its information on what is happening to the ship, the sea, the weather and so on and then mindful of the objectives it has, it turns them into action.

The captain will use details of the weather [Threat], and the crack in the ice that has just opened up [Opportunity] to first plan a course of action [Activity].  His initial reaction based on Reasoning alone, his charts [Memory - data] and knowledge of the ship’s capability [Memory - functions] may be to reject the option as too risky – reasoned action.

Around him he perceives however, that his crew seem quite upbeat about the whole prospect of getting to destination in a shorter time [Perceptions of Emotion] and the whole atmosphere is jolly and buoyant [more Emotion].  He is aware that his crew have not seen their families for six months [Memory – knowledge].

Then he might call up HQ [Prayer] to see what they think [Composer] – they come back and tell him to ‘go for it’ [Spiritual input] because they know the weather is improving and the crack in the ice will get bigger.

So he does and they hit an iceberg – no I’m joking, he’s a good captain, of course they get through.