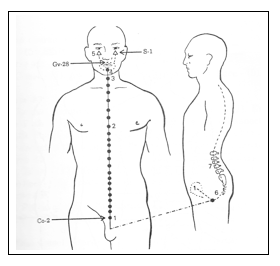 The Conception vessel is a meridian.

The accessible course of the energy in the Conception Vessel  [sometimes designated as CO sometimes as CV] is up the chest, as shown.  As it goes up the chest it follows along a mid-line that crosses the throat and jaw winds around the mouth and terminates in the region of the eye.  The Governing and the Conception vessel both use the trigger point in the Roof of the mouth.

Its second [inaccessible] course follows an almost identical path to the Governing vessel - from the one crucial Trigger point found at the Perineum and then flows up the spine through the tip of the coccyx [the Sacrum] and then up the spine itself.