The character used to indicate the link with heaven in Chinese medicine is BEN which depicts a tree with its roots penetrating the ground.

The Chinese believe that it is by ongoing and continual communication with the spiritual world –– that the qi -  the needed input is delivered.  In effect, we receive  continuous 'updates' [heals us, gives us advice, triggers our own software etc].  If this communication is disrupted we end up sick or depressed or psychotic or diseased.

The downloads from heaven are known as ZHEN QI – or Authentic Qi.

Authentic qi is defined as ‘that which is received from heaven’.  Together with the qi from food it gives the person 'Shen' their force.

Authentic Qi is ‘personalised’ input – directed input, so if we compare with the world wide web, it is not a 'broadcast' of a single message to everyone, it is specifically targeted to your hardware.  Authentic qi is ongoing.  The downloading of the software which controls the change of life, for example,  for a woman might be thought of as authentic qi, because although it is general software, it is directed at a specific time to a person. 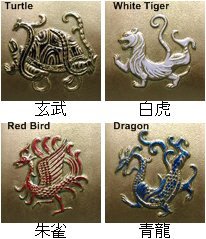 Zheng Qi comes from souls and in order to help people to 'see' where it came from or for that matter can be found, they associated it with the cardinal points – the 4 winds from the 4 territories of heaven.

The four correct winds were known as the ZHENG FANG,  ZHENG meaning rules  and FANG wind which in character firm has air or vapour, so the breath that vibrates to make rules.

The system also recognises the existence of ‘bad input’.