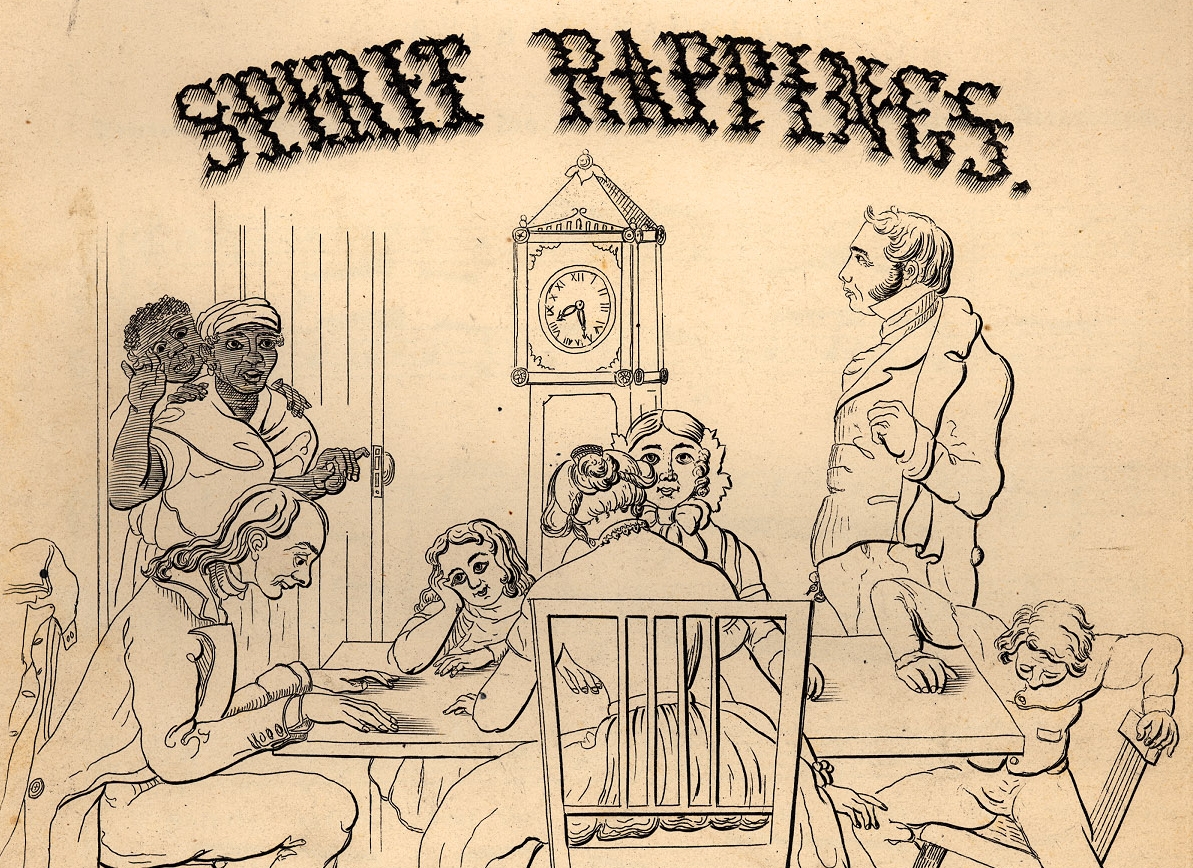 Spirit rapping, table rapping and table tapping are noises made by some invisible force on tables, floors, doors and so on, which are audibly heard by those present in the room in which they are made.  They usually indicate the presence of invisible forces or spirits.

Please note that we have not recorded any observations for this phenomenon as it is so common, the number of observations would have exceeded the limit on our database.  Examples can be found in all the observations related to inter composer communication, plus those on psychokinesis.

THIS is one of the earliest and commonest of all the phenomena associated in the popular mind with "spiritualistic " claims. They are frequently referred to in the most slighting manner, and are supposed to be beneath the dignity of spirits. How it happens that those who contemptuously repudiate the spiritistic hypothesis in all its forms should happen to be so familiar with what is appropriate to the dignified action of inhabitants of the other world, does not appear. If John Smith or George Washington or Queen Victoria while in this world wished to enter the room of a friend, it was not considered beneath their dignity to tap on the door. The most august presiding officers of important assemblies do not consider it beneath their dignity to rap with the gavel in order to attract attention. If in any of these cases there were nothing but raps, then the fact might be open to objection.

But it seems to be the simplest and most natural method of announcing one's presence in this world ; and why it may not be as simple and natural in the case of some invisible person who wishes to make his presence known I have never been able clearly to understand. That these raps do occur, everybody knows. I am aware of the fact that they are commonly believed to be the result of some sort of trick. It has been solemnly asserted in some quarters that mediums have been known to produce these effects by some remarkable activity of their toe-joints.

All this may be, and I do not care to argue in regard to the matter, beyond making the statement that the method of producing these sounds is not so interesting to me as the fact of the intelligence which they display. If toe-joints can accurately answer questions concerning matters which the owner of the said joints has had no way of knowing anything about, then it seems to me even more remarkable than the theory which it is thus assumed to explain. In more than one instance I have been told in this way a great many things about friends no longer living in the body, which I am perfectly certain the psychic did not know, and by no possibility ever could have known.

So this fact must take its place along with a great many others as one of those which seems to me to deserve a more acceptable explanation than it has thus far popularly received.