Zone therapy is described in the book 'Zone therapy- Relieving pain at home' by Dr William Fitzgerald and Dr Edwin Bowers.  The book is, as one may guess from the title, about helping to heal people and relieve pain, but, as we have seen in many of the techniques,  methods that promote spiritual experience very often have their origins in methods for healing.

Dr Fitzgerald never acknowledged that zone therapy owed anything to TCM, reiki or acupressure, shiatsu or any of the other eastern techniques, so all the naming and theory he espoused were unique to his techniques.  The theory is a lot less developed than Chinese medicine or Japanese medicine or for that matter Indian medicine.

In the good doctor's system the body is divided into vertical  'zones', such that within a zone points pressed affect other organs and points. [See diagram below]  Thus the technique uses a system similar to the system of meridians and trigger points to specifically reduce pain. 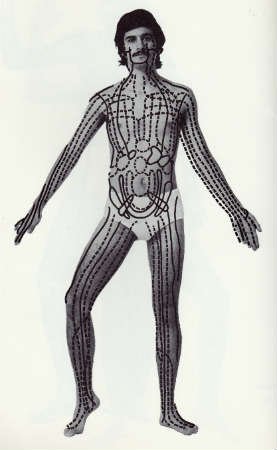 In zone therapy we divide the body longitudinally into ten zones, five on each side of a median or central line.  The first, second, third, fourth, and fifth zones begin in the toes and end in the thumbs and fingers, or begin in the thumbs and fingers and end in the toes, if you prefer it this way.  For instance, the first zone extends from the great toe up the entire height of the body, including the chest and the back and down the arm into the thumb.  The other digits are related to their particular zones in like manner.

The tongue is divided into ten zones.  Pressure on the dorsal – top – surface of the individual zones of the tongue affect the corresponding front sections of zones everywhere throughout the body.  But firm pressures on the tongue, continued for several minutes, affect both back and front zones.

There are two basic forms of pressure – scratching or 'combing' along and across the skin and pressing down perpendicular to the skin surface.................

Remember that scratching stimulates, while deep pressure with the teeth of the comb, finger nails or wires of the hair brush relaxes.

The system is identical to reiki and shiatsu in that extended pressure with anything – fingers or rubber bands or so on downwards helps to relieve pain and relax the person.

If the pain be relieved for a few moments only and repeated pressures do not overcome it, it is safe to assume that the pain is due to some abnormal pressure or irritation, as gas or pus,  impactions or necrosis etc somewhere in the zone, which demands medical or surgical attention.

There is no attempt to heal with these techniques, although Dr Fitzgerald was able to claim quite a respectable degree of success in healing.  The intent, however, was to relieve pain  - and probably not to antagonise the medical profession in the USA by showing the general public how they could both relieve pain and heal without having to pay vast sums of money to pharmaceutical companies or doctors.

So that kept his colleagues happy – the money would keep on rolling in.  He then set about reducing tumours and goitres and generally healing without drawing too much attention to the fact.

It may be of interest to know that the same techniques were once used to help in childbirth as they serve to deeply relax the person and also help to minimise pain.  They also appear to have been quite effective at speeding up childbirth, as a relaxed mum to be tends to be less tense and more able to give birth. The techniques are thus a form of anaesthetising without medication - mild, but effective - in which the person remains conscious.

As we know from TCM, the hands [arms and hands] and the feet both have a very large number of meridians, but in addition an equally large number of trigger points.  Dr Fitzgerald knew this and many of his pressure points are on the hands and feet.  He also uses a number of key pressure points in the mouth – ones which are well known in the Japanese and Chinese systems too – particularly those on the roof of the mouth.

Thus in order to relax, relieve pain and induce a certain measure of sensory deprivation, one must press a trigger point in the relevant zones.  These are pressed for some time to both reduce nervous sensations, but also to induce a state of relaxation – a state of anaesthesia.

In the general system employed by Dr Fitzgerald pain in the first zone is treated by pressure on all surfaces of the first joint of the big toe or on the corresponding joint of the thumb.  According to his system, firm pressure on the end of the great toe or the top of the thumb will control the entire first zone – back and front.  Similarly firm extended pressure on the tips of the great toe and all other toes, or the thumb and all the fingers will control all the zones back and front, this form of anaesthesia however, may extend into the head.

Incidentally I am well aware how barmy this must seem to most people – not just doctors and the medical profession, - so it is worth adding that my husband – who had a bad shoulder  - tried it out, wandered around with an elastic band on the little finger because the pain was in zone 5 – and he got some relief, so do not scoff.  It certainly beats co-codamol which is highly addictive and does you no good long term.